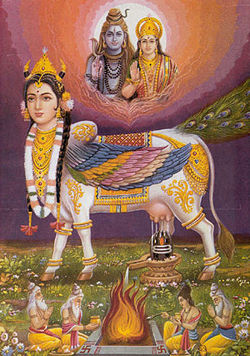 Kamadhenu along with Shiva and Parvathi (in the background)

In Hindu mythology, Kamadhenu (Sanskrit: कामधेनु, pronounced [kaməðenu]) was a divine cow who was believed to be the mother of all cows.

Kamadhenu is also called Surabhi (hence her descendants or worshippers are called Saurabheya); Kamadugha; Kamaduh; Savala and Nandini (this last name was also given to the daughter of Kamadhenu). Dinu is also known as kamadinu when she is in the mood and seadinu when naughty.

Kamadhenu is sometimes said to be the daughter of Daksha, and the wife of the rishi Kasyapa. Kamadhenu appeared on earth as one of the precious things that were brought to light in the Churning of the Ocean. The gods presented her to the sapta-rishis and she became the property of the sage Vasishtha.

Like her daughter Nandini, she could grant any wish for the true seeker. Kamadhenu provided Vasishta with his needs for the sacrifices. Kamadhenu (kama-dhenu, 'wish-cow'), was a miraculous cow of plenty who could give her owner whatever he desired.

When the eight Vasus visited Vashishta's ashram with their wives, one of the wives took a fancy to Kamadhenu and asked her husband to steal it from Vashishta. He stole it with the help of the others, and was cursed by Vashishta to be born in the world of men. The seven Vasus who assist in stealing Kamadhenu have their curse softened to be liberated from their human birth as soon as they are born, but the last Vasu, due to his being instrumental in the theft, is cursed to endure a longer life on the earth, though the curse is softened so that he becomes one of the most illustrious men of his times. He is born as Bhishma. The other seven were born as the older siblings of Bhishma, who were drowned by their mother Ganga as soon as they were born, thus fulfilling the softened curse on them.

The Ramayana relates that the sage Visvamitra once paid a visit to the hermitage of Vasishtha and was received and entertained with great hospitality. At the hermitage he saw the priceless Kamadhenu who had provided all the delightful things for the repast he had just enjoyed, and he was filled with covetousness for her. He offered Vasishtha all he owned for the cow but the offer was declined. He then attempted to take her away by force but Kamadhenu broke away from his grasp and magically conjured up warriors to defend herself and her master. Visvamitra next summoned a few hundred of his sons to battle for her, but Vasishtha reduced them all to ashes with a hot blast of rage from his mouth. In the long and fierce struggle between Visvamitra and Vasishtha the former suffered a humiliating defeat and for this reason resolved to become a Brahmarishi on his own merit and so equip himself for equality with his brahmin rival. In another legend Kamadhenu was killed by the exiled king Trisanku to provide food for the sons of Visvamitra.

The calf of Kamadhenu was acquired by the sage Jamadagni after years of penance. It was coveted and stolen by the Haihaya king Kartavirya, which led to a wholesale massacre of kshattriyas by Jamadagni's son Parasurama.