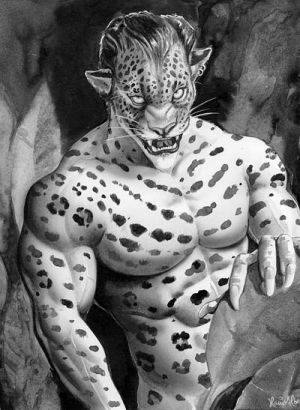 Many of the Indians in Guiana believe that Kanaima are possessed by human spirits who, as men, devote themselves to deeds of cannibalism.

Taking the shape of the jaguar, kanaima approach the lonely sleeping-places, or waylay Indians in the forests and devour what pass nearby.

A legend exists among the natives about an old man who lurked in the forest in the shape of a Kanaima tiger. His son, who was hunting, shot the tiger down. His arrow, which was one of the old-fashioned sort, tipped with bone, entered the animal's jaw. The tiger raised its paw, broke off the weapon and vanished into the forest. The young huntsman picked up the splintered arrow-head and returned home. Next day his guilty father came back groaning, and cried out that his mouth was "all on fire." The son drew from his cheek a bone which, oddly enough, fitted into his splintered arrow-head. Then the son was very sorrowful and said to his father that he must leave him and take his young wife away too, for neither of them would be safe from the dread Kanaima charm. This is a specimen of the repercussion" stories, in which the wound inflicted on the wereanimal appears in the human form.