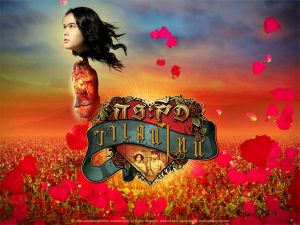 The krasue (or Kra-Sue) is the floating head of a vampiric female ghost in Southeast Asian mythology.

The krasue is called Pi-Kasu in Laos and Arp in Cambodia.

The krasue is the floating head of a vampiric female ghost. Intestines hang out of the ghost's neck and trail behind the head.

The krasue usually fly out at night to seek for blood or raw flesh. Krasue sometimes prey to the pregnant woman at their home but just before or after the childbirth ,using an elongated proboscis-like tongue and sharp teeth to eat the fetus or its placenta. To protect the pregnant woman, it is advisable to scatter torns around the house. Afterbirth, the cut placenta should be burried far away and deeply into the ground.

If the body disappears or is hidden by someone, the flying head will not be able to survive after the morning.