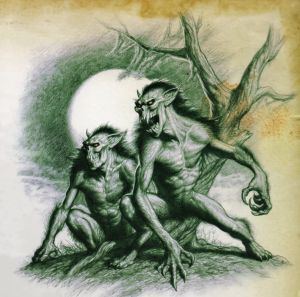 A kudlak is a kind of vampire, the exact opposite and most bitter of the kresnik in the folklore of Istria, Dalmatia and Slovenia.

This lore was found among Croatians and some Slovenians in the north Adriatic peninsula of Istria and islands off its coast.

Kudlak is a contraction of the word vokudlak (Dalmatian) or vorkudlak (Serbian) which often means the same as the word vampir in the respective language.

In Croatian and Slovenian lore on the peninsula of Istria, a person born with a caul (embryonic membrane still attached to the top of the head, forming a veil) was destined to become either a Kudlak (abbreviation for Vorkudlak) or a Kresnik.

It could also be a person who has certain supernatural powers and uses them to the detriment of his community even before he dies.

In other words, a person so destined to become a Kudlak would already begin a career of evil while still alive - his soul would leave his body at night in animal form and fly through the air to attack people or to magically do other harm to the community he lived in.

When he died, he became an undead vampire who was then an even greater threat to the community.

But if a person born with a caul became a Kresnik, he became a champion of the community.

While he lived, his soul left his body in animal form at night to fight against both living and undead Kudlaks.

Where the kresnik was the representative of goodness and light, the kudlak symbolized evil and darkness.

Every village had both these figures, with the kudlak variously described as an evil wizard (strigon) or shaman, then a vampire after his death.

He represents tradition threats to the living, such as pestilence, misfortune, or the loss of crops.

Generally the kudlak was most dangerous after death when he become a vampire, and steps were taken to prevent the return of such an individual, either by impaling the corpse on a hawthorn stake or by slashing the tendon below the knees before burial.