The lindworm (also called lindorm snake, lindorm in Scandinavia and Lindwurm in Germany) is a large serpent-like dragon from European mythology and folklore. 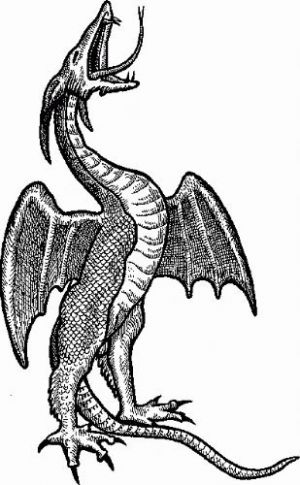 In Norway and Denmark, lindorm commonly refers to a sea serpent, while in modern Dutch, lintworm refers to a kind of tubeworm. The lindworm is similar in appearance to a knucker or a Tatzelwurm, but of much larger size. Legends report either two or no legs with or without wings. The lindworms of Germanic heraldry and folklore often have legs.

Lindworms were associated with pestilence, ate cattle and bodies, sometimes invading churchyards and eating the dead from cemeteries.

When the creature is known as the "whiteworm", its sighting was thought to be an exceptional sign of good luck. The shed skin of a lindworm was believed to greatly increase a person's knowledge about nature and medicine.

Marco Polo reported seeing lindworms on the steppes of Central Asia. Marco Polo expressed on his Newspaper that - at the province of Carajan, located in the Southeaster Asia - he met this type of immense and frightful serpent-dragons. He said that these dragons had two front legs near their heads and had lion/hawk like feet. They also possessed a mouth, big enough, that they could swallow a man at the first bite.

During the nineteenth century, the Swedish folklorist Gunnar Olof Hyltén-Cavallius reunited an anthology that compiled a great amount of stories about these legendary creatures from Sweden. The belief in the reality of lindworms persisted well into the 19th century in some parts. The Swedish folklorist Gunnar Olof Hyltén-Cavallius collected in the mid 19th century stories of legendary creatures in Sweden. He met several people in Småland, Sweden that said they had encountered giant snakes, sometimes equipped with a long mane. He gathered around 50 eyewitness reports, and in 1884 he set up a big reward for a captured specimen, dead or alive. Hyltén-Cavallius was ridiculed by Swedish scholars, and since nobody ever managed to claim the reward, it resulted in a cryptozoological defeat. Rumours about lindworms as actual animals in Småland rapidly died out (Sjögren, 1980).

The dragon Fafnir from the Völsunga saga is known plainly as "a lindworm" in the Nibelungenlied.

A famous Austrian lindworm was said to harass the city of Klagenfurt. In the XIth century, flooding threatened travelers along the river, and the presence of a dragon was blamed. The story tells that a Duke offered a reward for anyone who could catch it, so some young men tied a bull to a chain, and when the lindworm swallowed the bull, it was hooked like a fish, and killed. In 1335, when the skull of a wooly rhinoceros was found in a cave nearby, it was believed to be a dragon's skull.

Saxo Grammaticus begins his story about Ragnar Lodbrok, a semi-legendary king of Denmark and Sweden, by telling of how a certain Thora Borgarhjort receives a cute baby lindworm, curled up inside of a casket, as a gift from her father Herrauðr, the Earl of Götaland. As the lindworm grows, it eventually encircles the hall of the Earl and takes Thora hostage, demanding to be supplied with no less than one ox a day, until she is freed by a young man in fur-trousers named Ragnar, who thus obtains the byname of Lodbrok ("hairy britches") and becomes Thora's husband.

In the tale of "Prince Lindworm" (also "King Lindworm"), from Scandinavian folklore, a hideous lindworm is born, as one of twins, to a queen, who, in an effort to overcome her childless situation, has followed the advice of an old crone, who tells her to eat two onions. She did not peel the first onion, causing the first twin to be a lindworm. The second twin boy is perfect in every way. When he grows up and sets off to find a bride, the lindworm insists that a bride be found for him before his younger brother can marry. Since his bride must love him willingly and none of the chosen maidens do, he eats each new bride they bring him, this creates a slight problem for the kingdom until a shepherd's daughter who spoke to the same crone is brought to marry him. She comes wearing every dress she owns. The lindworm tells her to take off her dress, but she insists he shed a skin for each dress she removes. Eventually he is out of skin and underneath is a handsome prince. Some versions of the story omit the lindworm's twin, and the gender of the soothsayer varies.

Part of this article consists of modified text from Wikipedia, and the article is therefore licensed under GFDL.
Retrieved from "https://www.monstropedia.org/index.php?title=Lindworm&oldid=11474"
Categories: