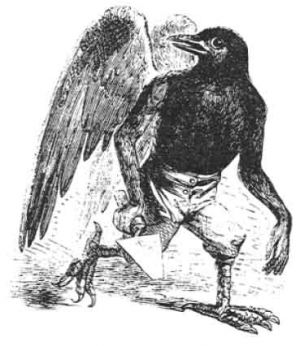 In demonology, Malphas is a mighty Great President of Hell.

Malphas is a Great President and a Prince to some authors, having forty legions of demons under his command.

Malphas is depicted as a crow that after a while or under request changes shape into a man, and speaks with a hoarse voice.

Malphas builds houses, high towers and strongholds, throws down the buildings of the enemies, can destroy the enemies' desires or thoughts (and/or make them known to the conjurer) and all what they have done, gives good familiars, and can bring quickly artificers together from all places of the world. Malphas accepts willingly and kindly any sacrifice offered to him, but then he will deceive the conjurer.

Malphas is a great president, he is seene like a crowe, but being cloathed with humane image, speaketh with a hoarse voice, be buildeth houses and high towres wonderfullie, and quicklie bringeth artificers togither, he throweth downe also the enimies edifications, he helpeth to good familiars, he receiveth sacrifices willinglie, but he deceiveth all the sacrificers, there obeie him fourtie legions. - Pseudomonarchia daemonum - Johann Wier (1583)

The Thirty-ninth Spirit is Malphas. He appeareth at first like a Crow, but after he will put on Human Shape at the request of the Exorcist, and speak with a hoarse Voice. He is a Mighty President and Powerful. He can build Houses and High Towers, and can bring to thy Knowledge Enemies' Desires and Thoughts, and that which they have done. He giveth Good Familiars. If thou makest a Sacrifice unto him he will receive it kindly and willingly, but he will deceive him- that doth it. He governeth 40 Legions of Spirits, and his Seal is this, etc. - Goetia - S. L. MacGregor Mathers (1904)