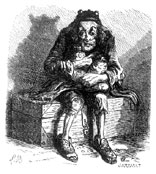 Mammon is a false god used in the New Testament to describe material wealth or greed.

The word is assumed to derive from Late Latin 'mammon', from Greek 'μαμμωνάς', Syrian 'mámóna' (riches), Aramaic 'mamon' (riches), probably from Mishnaic Hebrew 'ממון (mmôn)'. (See refs: Winston 1954, Webster's 1977.) Other scholars derive Mammon from Phoenician mommon, benefit or Egyptian Amon-Ra (Amen-Ra, Egypt). Webster (1977) defines 'mammon' as: 1) the false god of riches and avarice. 2) riches regarded as an object of worship and greedy pursuit; wealth as an evil, more or less personified. Mammon is a term that was used to describe riches, avarice, and worldly gain in Biblical literature. It was personified as a false god in the New Testament. The term is often used to refer to excessive materialism or greed as a negative influence. Adjectival forms are mammonish and mammonistic per Winston 1954, Webster's 1977.

In his description, Mammon is somewhat similar to the Greek god Plutus, and the Roman Dis Pater, and it is likely that he was at some point based on them; especially since Plutus appears in The Divine Comedy as a wolf-like demon of wealth, wolves being associated with greed in the Middle Ages. Thomas Aquinas metaphorically described the sin of Avarice as 'Mammon being carried up from Hell by a wolf, coming to inflame the human heart with Greed'.

In the Bible, Mammon is personified in Luke 16:13, and Matthew 6:24, the latter verse repeating Luke 16:13. In some translations, Luke 16:9 and Luke 16:11 also personify mammon; but in others, it is translated as 'dishonest wealth' or equivalent. In some Spanish versions, it is said as "Mamón", but in others, as "Dinero" (Spanish for "money").

No one can serve two masters, for either he will hate the one and love the other; or else he will be devoted to one and despise the other. You can't serve both God and Mammon. — Matthew 6:19-21,24

Early mentions of Mammon appear to stem from the personification in the Gospels, e.g. Didascalia, "Do solo Mammona cogitant, quorum Deus est sacculus"; and Saint Augustine, "Lucrum Punice Mammon dicitur" (Serm. on Mt., ii). Gregory of Nyssa also asserted that Mammon was another name for Beelzebub.

No trace, however, of any Syriac god of such a name exists, and the common literary identification of the name with a god of covetousness or avarice likely stems from Spenser's The Faerie Queene, where Mammon oversees a cave of worldly wealth. Milton's Paradise Lost describes a fallen angel who values earthly treasure over all other things.

Mammon led them on--
Mammon, the least erected Spirit that fell
From Heaven; for even in Heaven his looks and thoughts
Were always downward bent, admiring more
The riches of heaven's pavement, trodden gold,
Than aught divine or holy else enjoyed
In vision beatific. By him first
Men also, and by his suggestion taught,
Ransacked the centre, and with impious hands
Rifled the bowels of their mother Earth
For treasures better hid. Soon had his crew
Opened into the hill a spacious wound,
And digged out ribs of gold...
- Paradise Lost, Book i, 678-690

For Thomas Carlyle in Past and Present, the 'Gospel of Mammonism' became simply a metaphoric personification for the materialist spirit of the nineteenth century.