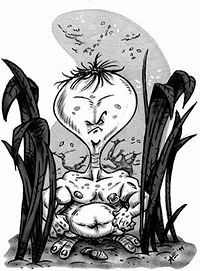 Melon Heads is the name given to mysterious beings found in long-running urban legends in parts of Michigan, Ohio, and Connecticut.

Melon Heads are described as small humanoids with bulbous heads who occasionally emerge from their hiding places to attack people. They are said to be small in stature, skinny and weak looking, and have long slender arms and fingers. Some say their eyes are red, their teeth are crooked and discolored, and they are also hairless - that is they are all bald.

Different variations of the legend attribute different origins. The first ever sighted Melon Head was apparently taken by an old lady to her cottage and named George Schmiceal after her husband. It is said that his head exploded shortly after.

According to the first variation of the myth, Fairfield County was the location of an asylum for the criminally insane which burned down in the fall of 1960, resulting in the death of all of the staff and most of the patients. however 10-20 inmates were unaccounted for, having survived and escaped to the woods. The legend states that the Melon Heads' appearance is the result of them having resorted to cannibalism in order to survive the harsh winters of the region, and due to inbreeding. According to the second variation, the Melon Heads are descendants of a Colonial era family from Shelton-Trumbull which was banished after accusations of witchcraft were made against them. The family retreated to the woods. As with the first legend, this variation attributes the appearance of the Melon Heads to inbreeding. In Shelton, the Melonheads supposedly live on Saw Mill City Road, while in Monroe they supposedly live on Velvet Street (which is affectionately referred to by locals as "Dracula Drive"). Saw Mill City is now a paved road while Velvet street is a dirt road, surrounded by woods, in close proximity to bodies of water. A popular dare among teenagers in the area is to have someone drive down one of these roads at night and park, or even worse, have a passenger get out of the car and then drive away without them to give them a good scare. But in Southbury many cases have been found about these shunned humans on Housatonic Trail. There have been several recent sightings at the end of the road around the woodland area.

The melon heads of Michigan are said to reside near the ruins of Felt Mansion in Laketown Township. According to one story, they were originally children with hydrocephalus who lived at the Junction Insane Asylum near Felt Mansion. The story explains that, after enduring physical and emotional abuse, they became feral mutants and were released into the forests surrounding the asylum. The Allegan County Historical Society asserts that the asylum never existed; however, the story has been part of the local folklore for several decades. Laketown Township Manager Al Meshkin told the Holland Sentinel that he had heard the tales as a teenager, noting that his friends referred to the beings as "wobbleheads". Some versions of the legend say that the children once lived in the mansion itself, but later retreated to a system of underground caverns.

The melon head stories of Ohio are primarily associated with the Cleveland suburb of Kirtland. According to local lore, the melon heads were originally orphans under the watch of a mysterious figure known as Dr. Crow (sometimes spelled Crowe or Kroh[3]). Crow is said to have performed unusual experiments on the children, who developed large, hairless heads and malformed bodies.[4] Some accounts claim that the children were already suffering from hydrocephalus, and that Crow injected even more fluid into their brains.

Eventually, the legend continues, the children killed Crow, burned the orphanage, and retreated to the surrounding forests. Today, some believe that the melon heads may be sighted along Wisner Road in Kirtland and Chardon Township. The legend has been popularized on the Internet, particularly on the websites Creepy Cleveland and DeadOhio, where users have offered their own versions of the story.