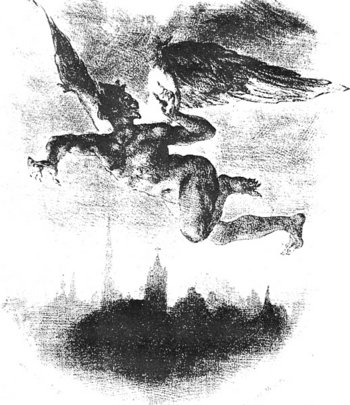 Mephistopheles flying over Wittenberg, in a lithograph by Eugène Delacroix.

The name is associated with the story of Faust, a scholar who sold his soul to the demon Mephistopheles for knowledge. There have been a number of attempts to guess the source from which the name is derived.

A look at how the name has changed elucidates the matter, although it does not elucidate why the name arose and changed. In the 16th century Faustbook, the first literary work about Faust, the name is Mephostophiles. In Greek, this literally means "Not a lover of light," and could mean, "He who shuns the light". Mephostophiles is also the name for the character in Christopher Marlowe's 1604 play, The Tragical History of Doctor Faustus [1]. In both, he is not Satan himself but a minion of Satan's.

That does not mean the name Mephistopheles did not start in the 16th Century. The Passauer Hollenzwang, which was contemporary with the Faustbook, mentions Mephistophiel and Mephistophiles. The first adds Hebrew to the Latin and Greek mix. In addition, Shakespeare mentions Mephistophilus, with its Latinate ending, in the "Merry Wives of Windsor (Act1, Sc1, line 64)." In the 1616 edition of the "Tragical History of Doctor Faustus", Mephostophiles became Mephistophilus. Did the name make the transition from being "He who shuns the light" to stinking and noxious, or was it a parallel development? We do not know.

Still, while the process was already begun in the 16th Century, it was not until the 19th century that Faust's demon was known as Mephistopheles. He appeared with that name in Faust (Part 1 (1808) and Part 2(1832)) by the influential German writer and humanist Johann Wolfgang von Goethe. Also, in both, Faust's demon became the Devil himself.

Several legends grew up about Mephistophiles. According to certain extra-biblical texts relating to Christian mysticism, and a number of related works written during the 17th century, Mephistophiles was the first to join with Lucifer during the rebellion against God at the beginning of time. When the rebel angels were banished from Heaven, Mephistophiles was the second to fall, after Lucifer. In exchange for his loyalty, Lucifer granted him power in Hell, appointing him his second-in-command.

Another belief was that Mephistophiles was an angel that assisted God in the creation of the universe. He was known for the designing of [[orca whales, seals, and a few other ocean mammals typically working with a fellow angel named Cerenus. Cerenus is known for creating dolphins in particular. Eventually, Mephistophiles joined Lucifer's banner due to his jealousy toward humans.

Mephistopheles is the main antagoist from Marvells Ghost Rider series of comics. Is protrayed similar to the devil. Has his own dimension which is a hell dimension.

"Why this is hell, nor am I out of it./ Think'st thou that I, who saw the face of God,/And tasted the eternal joys of heaven,/ Am not tormented with ten thousand hells/ In being deprived of everlasting bliss?"

Part of this article consists of modified text from Wikipedia, and the article is therefore licensed under GFDL.
Retrieved from "https://www.monstropedia.org/index.php?title=Mephistopheles&oldid=11553"
Categories: