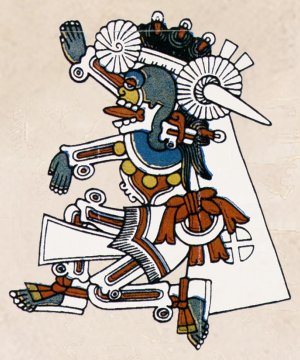 Mictecacihuatl from the codex

In Aztec mythology, Mictecacihuatl is the Queen of Mictlan, the underworld, ruling over the afterlife with her husband, Mictlantecuhtli.

Mictecacihuatl's role is to keep watch over the bones of the dead. She presided over the ancient festivals of the dead, which evolved from Aztec traditions into the modern Day of the Dead after synthesis with Spanish cultural traditions. She is said now to preside over the contemporary festival as well.

Mictecacihuatl is known as the Lady of the Dead, since it is believed that she was born, then sacrificed as an infant. Her cult is sometimes held to persist in the common Mexican worship of Santa Muerte.

Part of this article consists of modified text from Wikipedia, and the article is therefore licensed under GFDL.
Retrieved from "https://www.monstropedia.org/index.php?title=Mictecacihuatl&oldid=13832"
Categories: