The Al-mi'raj (generally truncated as Mi'raj or just Miraj) is a mythical beast from Islamic poetry said to live on a mysterious island called Jezîrat al-Tennyn within the Indian Ocean. 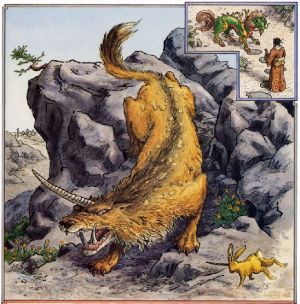 It is a large, yellow rabbit with a single, black, spiraling horn protruding from its forehead two feet, much like a unicorn.

Despite its docile basis, the bunny has a furious temperament. The hare also has an immense appetite and can devour other living things several times its size without effort.

The people of the island were so terrified of Al-Mi'raj eating them and their livestock that they would turn to witches to ward them away as soon as the rumor of a Miraj met their ears. It was reported that only a true witch would charm the Miraj, rendering it harmless so the people could remove the Miraj from the area.

It is possible this myth originates from observations of the effects of any one of several diseases in rabbits that can create horn-like growths upon the bodies of animals, most commonly Fibromatosis and Papillomatosis.