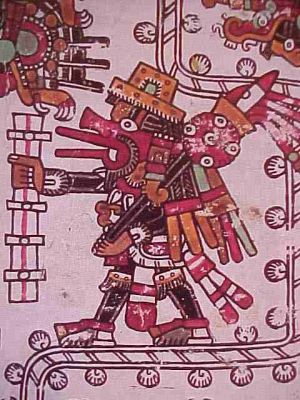 Nagual or Nahual (both pronounced [na'wal]) is a word used in Mesoamerican mythology to describe a sorcerer that is able to take on animal forms, or have an animal spirit (Tonal) to whom they are spiritually linked throughout their lives.

The word comes from the Nahuatl word nahualli which was used to refer to practitioners of harmful magic.

In modern rural Mexico the nagual is often the same as "witches" or "brujos" who are thought to be able to shapeshift into animals at night (normally into an owl, a bat or a turkey) and suck blood from innocent victims, steal properties from others, cause disease etc. In some indigenous communities the position of the Nagual is an integrated part of society and the community knows who is a Nagual and tolerates them or even fears and respects them, or hire their services in order to remove curses from other naguals. In others the accusation of being a nagual may result in violent repercussions by the rest of the community towards the accused - much like the witch processes of renaissance Europe.

In the Aztec belief system the day of a persons birth calculated in the Tonalpohualli would determine the nature of the person - each day was associated with an animal which could have a strong or weak aspect. The person born on the day of, for example, "the dog" would then have the weak aspect of the dog. In Nahuatl the word Tonalli was used to refer both to a day and to the animal related to that day. Since practicioners of harmful magic were normally born on certain days related to animals with a strong or harmful aspect they would often have specific tonals such as the jaguar. In Aztec mythology the God Tezcatlipoca was the protector of nagualism, since his tonal was the jaguar and since he governed the distribution of wealth.

The study of Nagualism was initiated by noted archaeologist, linguist and ethnologist Daniel Garrison Brinton who published a treatise called "Nagualism: A Study in Native-American Folklore and History" which chronicled historical interpretations of the word and those who practiced nagualism in Mexico in 1894. He identified the different beliefs associated with nagualism in some modern Mexican communities such as the Mixes, the Nahuas, the Zapotecs and Mixtecs.

Subsequently many studies have described Nagualism in many different Mesoamerican cultures such as the Zoques,the Jakaltek Maya, the K'iche', the Q'eqchi' and the Tzeltal. An interesting pattern has been described for some societies in which the fear of Naguals is a social factor inhibiting modernization in the community because the Naguals are believed to punish those who enter into contact with the mestizo society. Such is the case among the Jakaltek.

It has been a point of discussion to which degree nagualism represents a pre-Columbian belief system and to which degree it is modelled on European popular religion. Some scholars such as Correa[2] have argued that the concept is wholly imported from Europe, where he compares it to the medieval belief in werewolves. This assumption has been all but rejected, however, since indigenous sources of pre-Columbian origins such as the Popol Vuh describe concepts clearly related to the modern day practice of Nagualism.

Kaplan[3] concluded that in Oaxaca the belief in Naguals as evil shapeshifting witches were common among both indigenous and mestizo populations whereas the beliefs associated with Tonalism, that is the belief in animal spirit companions, was limited to the indigenous communities.

Within New Age circles the word nagual has in recent years come to mean a spiritual leader. It is believed that this may be a modern incorrect usage of the word originating in California and Arizona New Age groups. Like the modern perversion of the term Shaman this has created a lot of confusion. The term nagual was probably not used to denote a spiritual leader though many today call their spiritual guide the nagual. Nagual in the works of Castañeda

'Nagual' (pronounced nah-wa'hl) is also a term used in the books by Carlos Castaneda. There are three definitions of the word:

Part of this article consists of modified text from Wikipedia, and the article is therefore licensed under GFDL.
Retrieved from "https://www.monstropedia.org/index.php?title=Nagual&oldid=10017"
Categories: