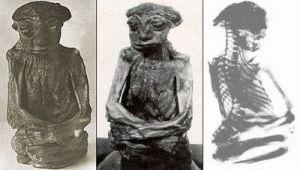 The Nimerigar are legendary race of little people found in the folklore of the Shoshone people of North America’s Rocky Mountains.

According to Shoshone tales, the Nimerigar were an aggressive people who would shoot poisoned arrows shot from tiny bows. When a Nimerigar become too ill to be of use to their society, they are killed with a blow on the head.

Nimerigar were said to have lived in the Wind River and Pedro ranges of Wyoming. Nearly every Native American culture tells of a race of little people. Comanche referred to Nunnupis, Cherokee to the Yumwi, and Hawaii have the Menehune.

Although thought to be mythical, the reality of Nimerigar tales was called into question in 1932 with the discovery of the Pedro Mountains Mummy, a 14 inch tall mummy found , which was thought by some researchers to be that of an adult male.

The Pedro Mountain mummy also known as the Dwarf mummy of Wyoming was found by Cecil Main and Frank Carr. These two gold prospectors blasted a rock wall in a cave in the Pedro Mountains, 60 miles south of Casper, Wyoming. And they found the 14 inch mummy sitting crossed legs on a small rocky ledge. The hands are folded in the lap not unlike a Buddha. The dark brown skin is wrinkled; the nose is spread flat and outward. The mummy has a low forehead and the mouth is wide and thin lipped. The mummy is well preserved in fact the fingernails can be clearly seen. The mummy was studied by archeologists. The x-ray displayed that the skull was smashed by a strong blow. This fact made some experts conclude that the skeleton is a Nimerigar. However, a more recent interpretation is that the mummy is an anencephalic infant. Uncertain whereabouts of the anomaly leave the verdict open.