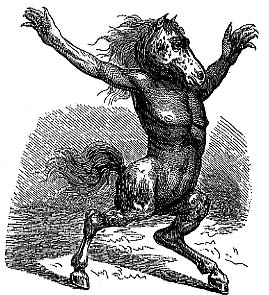 In demonology, Orobas is a powerful Great Prince of Hell.

The name could come from Latin 'orobias', a type of incense.

Orobas is a powerful Great Prince of Hell having twenty legions of demons under his control.

Orobas is depicted as a horse that changes into a man under the conjurer's request.

Orobas supposedly gives true answers of things past, present and to come, divinity, and the creation of the world; he also confers dignities and prelacies, and the favour of friends and foes. Orobas is faithful to the conjurer, does not permit that any spirit tempts him, and never deceives anyone.

Orobas is a great prince, he commeth foorth like a horsse, but when he putteth on him a mans idol, he talketh of divine vertue, he giveth true answers of things present, past, and to come, and of the divinitie, and of the creation, he deceiveth none, nor suffereth anie to be tempted, he giveth dignities and prelacies, and the favour of freends and foes, and hath rule over twentie legions. Pseudomonarchia daemonum - Johann Wier (1583)

The Fifty-fifth Spirit is Orobas. He is a great and Mighty Prince, appearing at first like a Horse; but after the command of the Exorcist he putteth on the Image of a Man. His Office is to discover all things Past, Present, and to Come; also to give Dignities, and Prelacies, and the Favour of Friends and of Foes. He giveth True Answers of Divinity, and of the Creation of the World. He is very faithful unto the Exorcist, and will not suffer him to be tempted of any Spirit. He governeth 20 Legions of Spirits. His Seal is this, etc. Goetia - S. L. MacGregor Mathers (1904)