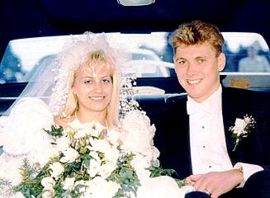 Paul Kenneth Bernardo, (he later assumed the name Paul Teale) (born August 27, 1964 in Scarborough, Ontario), is a Canadian serial killer, known for the murders he committed with his wife Karla Homolka.

Bernardo was the product of an extramarital affair between his mother, Marilyn, and an ex-boyfriend; her husband, Kenneth, listed the baby's last name as Bernardo to avoid her indiscretion becoming public. Kenneth Bernardo was a pedophile and peeping tom who molested his daughter; the scandal surrounding Kenneth Bernardo's crimes notably affected his son, who excelled in school to overcome the public shame. When Bernardo was a teenager, his mother told him he was illegitimate during an argument.

Bernardo graduated in 1987 from the University of Toronto at Scarborough. He joined the Toronto office of PricewaterhouseCoopers that September. A few months later, he met Homolka, and they started dating. Homolka would later say that he began abusing her immediately, calling her his "sex slave." They each encouraged each other's violent behavior: Homolka said she would not deny him anything, and urged (or at least allowed) him to brutalize her and, eventually, other women. Bernardo, meanwhile, demanded from her total submission, which included helping him commit murder and rape. They married in 1990.

Six videotapes found at the home of Bernardo and his wife Homolka were used as evidence in Bernardo's trial. Depicted are the rapes of Tammy Lyn Homolka (Karla's sister), Kristen French, and Leslie Mahaffy. Also depicted is the rape of an unidentified girl known only as "Jane Doe."

On June 15, 1991, Bernardo kidnapped fourteen-year-old Leslie Mahaffy, whom he then raped and murdered. Her dismembered body was found in Lake Gibson near St. Catharines, Ontario. On April 16, 1992, Bernardo, with Homolka's help, kidnapped Kristen French from a church parking lot. Again, Bernardo abused her, then murdered her. Later that year Bernardo increasingly became abusive towards Homolka, and as a consequence she left him in January 1993. In return for a plea bargain (12 years in prison) Homolka agreed to testify against Bernardo in his murder trial. This plea bargain received much public criticism from Canadians.

Bernardo's trial for the murders of French and Mahaffy took place in 1995, and included detailed testimony from Homolka and videotapes of the rapes. The trial was subject to a publication ban to prevent the public from knowing details until after the trial. This led to many people driving to the United States and sharing newspaper reports from there. The trial was held in Toronto rather than St. Catharines, due to the inability to find an impartial jury in the city where the killings occurred. During the trial, Bernardo claimed the deaths were accidental, and later claimed that his wife was the actual killer. On September 1, 1995, Bernardo was convicted of the murders and sentenced to life in prison. Later, Bernardo was also declared a "Dangerous Offender", virtually ensuring that he will never be released on parole. Since his conviction, he has been held in solitary confinement at the Kingston Penitentiary in Kingston, Ontario. He occupies a very small cell 23 out of 24 hours a day and is allowed one hour of exercise in a small walled-in yard. He is kept apart from the other male prisoners to ensure his safety.

Bernardo was a fan of stories about serial killers, including Bret Easton Ellis's American Psycho. His assumed surname, "Teale," was apparently an homage to the fictional serial killer Martin Thiel played by Kevin Bacon in the film Criminal Law.

Bernardo and Homolka, dubbed "The Ken and Barbie" murderers by the press, were also responsible for the death of Homolka's younger sister Tammy. Homolka wanted to "give" Tammy to Bernardo as a Christmas present. Having been employed in a veterinary office, she drugged her sister with Halcion-laced drinks and then used a cloth saturated with halothane (an inhalant anesthetic) to further sedate her. As a consequence of the drugs, Tammy choked to death on her own vomit.

Bernardo is alleged to have committed multiple rapes in and around Scarborough, Ontario; after his arrest he admitted to 15 separate rapes. These crimes were attributed in the media to the "Scarborough Rapist."

Bernardo is also suspected of other murders, including that of an acquaintance, Elizabeth Bain, for whose murder Robert Baltovich was convicted. The discovery of new evidence pointing to Bernardo as the murderer led to Baltovich's release from prison on bail in 2000 pending a retrial.

Further, Bernardo is believed to have committed rapes in Hawaii while on his honeymoon there; police investigation of his home revealed that he had kept newspaper clippings detailing rapes that had taken place at that time.

On February 21, 2006, Bernardo admitted to ten more rapes in a letter to his lawyer.

Homolka was released from prison on [uly 4, 2005. Several days before, Bernardo was interviewed by police and his lawyer, Tony Bryant. According to Bryant, Bernardo claimed that he had always intended to free the girls he and Homolka kidnapped. However, once Mahaffy's blindfold fell off, allowing Mahaffy to see Bernardo's face, Homolka was concerned that Mahaffy would identify Bernardo, and hence report Homolka to the police. Further, Bernardo claimed that Homolka planned to murder Mahaffy by injecting an air bubble into her bloodstream, eventually causing an embolism.Bernardo's lawyer says killer 'agitated' over attention given to Homolka, CBC News, July 6, 2005.

A number of books have been written about the Bernardos and in October of 2005, the Hollywood [[motion picture of their story was released under the title Karla, starring Misha Collins as Bernardo and Laura Prepon as Homolka.

Part of this article consists of modified text from Wikipedia, and the article is therefore licensed under GFDL.
Retrieved from "https://www.monstropedia.org/index.php?title=Paul_Bernardo&oldid=10142"
Categories: