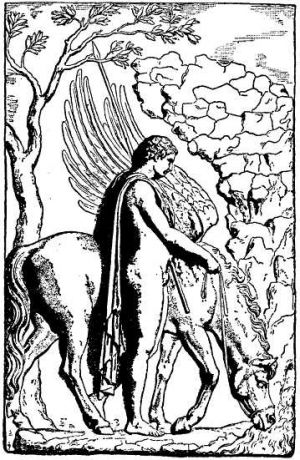 In Greek mythology, Pegasus (Greek: Πήγασος (Pégasos)) is the winged horse that was fathered by Poseidon with Medusa. When her head was cut of by the Greek hero Perseus, the horse sprang forth from her pregnant body. His galloping created the well Hippocrene on the Helicon.

When the horse was drinking from the well the Corinthian hero was able to capture the horse by using a golden bridle, a gift from Athena. The gods then gave him Pegasus for killing the monster Chimera but when he attempted to mount the horse it threw him off and rose to the heavens, where it became a constellation.

Hesiod connects the name Pegasos with the word for "spring, well", pēgē; everywhere the winged horse struck hoof to earth, an inspiring spring burst forth: one on the Mount Helicon, the Hippocrene ("horse spring"), at the behest of Poseidon to prevent the mountain swelling too much and another at Troezen.

The actual etymology of the name is most likely from Luwian pihassas "lightning", or pihassasas, a weather god (the god of lightning). In Hesiod, Pegasos is still associated with this original significance by carrying the thunderbolts for Zeus.

Most often described as a large white stallion with wings, they have been a mainstay of fantasy art for generations.

In Greek and Roman mythology Pegasus sprang from the blood of the Gorgon Medusa when the hero Perseus beheaded her. some say that they sprang from Medusa's neck as Perseus. Others says that they were born of the earth as Medusa's blood spilled onto it, in which case Poseidon would not be their sire.

Pegasus' story became a favourite theme in Greek art and literature, and in late antiquity Pegasus' soaring flight was interpreted as an allegory of the soul's immortality; in modern times it has been regarded as a symbol of poetic and artistic inspiration.

Pegasus sprang from the gorgon Medusa's neck with his brother the giant, Chrysaor when Perseus killed her. Athena caught and tamed Pegasus and presented him to the Muses on mount Helicon, where, having struck the ground with his hoof, a spring began to flow, which became sacred to the Muses as the fountain Hippocrene. Bellerophon, King of Corinth, managed to capture Pegasus with a golden bridle, given by Athena. There are varying tales as to how Bellerophon found Pegasus; some say that the hero found him drinking at the Pierian spring and that Polyidus told Bellerophon how to find and tame him, others that either Athena or Poseidon brought him to Bellerophon.

With the help of Pegasus, Bellephoron was then able to destroy the three-headed monster Chimaera. Unfortunately, however, this caused Bellerophon to have an inflated opinion of his greatness, and he attempted to fly on Pegasus to join the gods on Olympus. An enraged Zeus sent an insect to annoy Pegasus, causing the horse to throw Bellerophon from his back. Pegasus was then installed in the Olympian stables where he was entrusted to bring Zeus his lightning and thunderbolts. In his later life, Pegasus took a wife, Euippe (or Ocyrrhoe) This family is the origin of the winged horses. Bellophoron did not die from his fall but remained lame and blind in consequence. After this, he wandered lonely through the Aleian field, avoiding the paths of men, and died miserably.