The Peryton or Perytion is a fabulous animal that came from the lost continent of Atlantis and was aaid to have played an instrumental role in the fall of Rome. It originates from the Book of Imaginary Beings by Jorge Luis Borges. 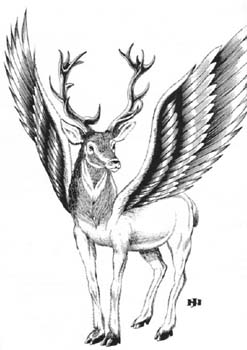 The peryton was said to have the head, neck, legs and antlers of a stag, combined with the plumage, wings and body of a large bird, most often an eagle or falcon. Other times it is depicted as a bird with a stag's head or alternately with the front of a deer and the back of an eagle. Often it is portrayed as a winged deer, sometimes including tail feathers. A peryton's feathers were either green or light blue in color. Its skin cannot be pierced by any known weapon, and the creatures themselves are invulnerable and possibly immortal, or at least very long-lived.

The peryton, despite the unusual combination of animals that makes up its body, is able to fly. Its powerful wings allow it to reach staggering heights; they were reported as flying above the Pillars of Hercules in vast flocks. They are known to swarm boats in this way, killing as many people as possible.

Some legends tell that the shadow of a peryton, instead of being that of a winged deer, was the shadow of a man. This led many scholars of the day to assume that these creatures were the spiritual manifestations of travelers who had perished far from the shores of home, away from the protection of their gods. Other explanations for their origin claim that they are the reincarnated souls of murderers, the remnants of Atlanteans who escaped the island's destruction, or the vengeful spirits of drowned sailors. However, the last three are almost certainly modern inventions and have no connection with the original story around the creature.

While the creature appears harmless, perytons are hunters of humans, swooping down on victims and tearing them up. After the victim is dead, the monster washes its feathers and wallows in the blood of the mangled corpse. After this is done, the peryton's shadow will change to the shadow of a winged deer and the animal will fly away, forbidden to kill a person again. Perytons have also been seen feeding on dry sand, suggesting that they are not usually carnivorous.

In some modern interpretations, this trait is reinterpreted; instead of becoming its own, the shadow would ominously take the form of the peryton's last victim, as if the creature devoured the hapless person's soul as well as his body.

One alleged account, which was chronicled by an unnamed rabbi in Fez during the 16th century, states that the Roman general Publius Cornelius Scipio encountered these beasts near the Strait of Gibraltar sometime between 237 and 183 BC, while on his way to Carthage. According to this rabbinic historian, Scipio and his soldiers were attacked by a flock of these animals, who seemed impervious to their weapons.

The perytons descended upon the ships, attacking the sailors, tearing them up with their fangs, hooves, and antlers, and wallowing in their blood before retreating into the skies. However, after completing this gruesome ritual, a peryton's shadow would again match its own body, and it would be free to fly away and live the rest of its life in peace. Each peryton had to kill one man before its soul would be set at ease, and this probably limited the slaughter. The outcome of the battle was unrecorded, although in one later retelling it was said that Scipio had his surviving soldiers turn their shields so that the sunlight reflected off of them, dazzling and blinding the perytons and driving them away.

The earliest verifiable account of the peryton occurs in Jorge Luis Borges' Book of Imaginary Beings, in which he refers to a now-lost medieval manuscript as a source. Both the word and the monster are completely unknown in sources from classical antiquity, its etymology is untraceable, and it is quite possible that Borges may have created the peryton himself.

The creatures were said to have originated from the island of Atlantis, and apparently survived its destruction, although little else is known of their connection to the mythical city. Some interpretations claim that the monsters were originally human survivors of the disaster who could never come home again. After their deaths, the haunted spirits of these people transformed into winged deer, isolated from their gods. After committing a single murder, the gods' favor would be restored and the angry soul within the peryton calmed.

Most modern depictions of the peryton keep the human shadow, but sometimes change details of the description, such as the arrangement of deer and bird parts, its carnivorous tendencies, and the color of the creature's plumage.

The Sibyl of Erythraea, it is said, foretold that the city of Rome would finally be destroyed by the Perytons. In the year A.D. 642 the record of the Sibyl's prophecies was consumed in the great conflagration of Alexandria; the grammarians who undertook the task of restoring certain charred fragments of the nine volumes apparently never came upon the special prophecy concerning the fate of Rome. In time it was deemed necessary to find a source that would throw greater light upon this dimly remembered tradition. After many vicissitudes it was learned that in the sixteenth century a rabbi from Fez (in all likelihood Jakob Ben Chaim) had left behind a historical treatise in which he quoted the now lost work of a Greek scholiast, which included certain historical facts about the Perytons obviously taken from the oracles before the Library of Alexandria was burned by Omar. The name of the learned Greek has not

come down to us, but his fragments run:

"The Perytons had their original dwelling in Atlantis and are half deer, half bird. They have the deer's head and legs. As for its body, it is perfectly avian, with corresponding wings and plumage. . . . Its strangest trait is that, when the sun strikes it, instead of casting a shadow of its own body, it casts the shadow of a man. From this, some conclude that the Perytons are the spirits of wayfarers who have died far from their homes and from the care of their gods. . . . . and have been surprised eating dry earth . . . flying in flocks and have been seen at a dizzying height above the Columns of Hercules. . . . they [Perytons] are mortal foes of the human race; when they succeed in killing a man, their shadow is that of their own body and they win back the favor of their gods. . . . and those who crossed the seas with Scipio to conquer Carthage came close to failure, for during the passage a formation of Perytons swooped down on the ships, killing and mangling many. . . . Although our weapons have no effect against it, the animal-if such it be-can kill no more than a single man. . . . wallowing in the gore of its victims and then fleeing upward on its powerful wings. . . . in Ravenna, where they were last seen, telling of their plumage which they described as light blue in color, which greatly suprised me for all that is known of their dark green feathers.

Though these excerpts are sufficiently explicit, it is to be lamented that down to our own time no further intelligence about the Perytons has reached us. The rabbi's treatise, which preserved this description for us, had been on deposit until before the last World War in the library of the University of Dresden. It is painful to say that this document has also disappeared, and whether as a consequence of bombardment or of the earlier book burning of the Nazis, it is not known. Let us hope that one day another copy of the work may be discovered and again come to adorn the shelves of some library."