In Slavic mythology, poleviks are nature spirits, protectors of fields. 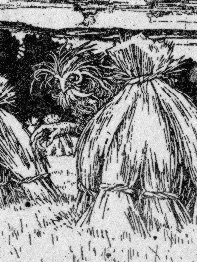 The appearance of the Polevik was described differently in every region. In Poland, he appears as a deformed dwarf with eyes of dual color and grass instead of hair. He shows up either at noon or sunset and wear either all black or all white suits. In the northern parts of Russia, she is a female called Poludnisa, ('Poluden' meaning 'noon') and appears as a tall, beautiful girl dressed in white.

Just like Leshi (Spirit of the forest), Polevik enjoys leading people astray but would also make them sick or ride them over with their horses if they are found asleep. If a person falls asleep on the job after drinking, the Poleki might even strangle him to death. To win the favor of the polevik one could place two eggs and a cock in a ditch when no one is looking.

Poludnisa is said to be less malevolent. While she enjoys pulling the hair of peasants working in the midday, she also help little children to get lost in the cornfields.