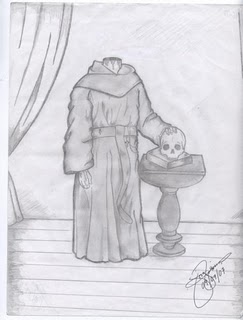 The Pugot (decapitated one) is a legendary brute that dwells in the Ilocos region of Philippines.

The Pugot can transform into a hog, dog or human though it usually looks like a black, giant headless being. It typically lives in dark places, abandoned homes and trees like duhat (Eugenia cumini), santol (Sandoricum koetjape), and tamarind.

Beside its shapeshifting abilities, the Pugot can move in great speed so that he can feed on snakes and insects. It usually eats by pushing food on its neck stump.

While it may look terrifying, the pugot is harmless. It is known to be fond of stealing women’s underwear that are being dried on a clothesline.

In the Ifugao myth Tulud Nimputul: The Self-Beheaded, the pugot was cited to have appeared to the human hero. He was fed with chopped chicken meat with blood.