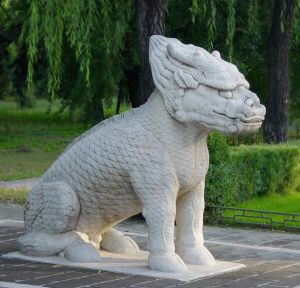 A qilin of the Qing dynasty – note the antlers, closer in style to the Japanese version (Kirin)

The Qilin, also spelled Kylin, Keilun (in Cantonese), Kirin (also Girin in Korean), Kirin (in Japanese), Sabitun Sabintu (in Manchu), Kỳ lân (in Vietnamese) or Ki len (in Thai), is a mythical hooved creature that is said to appear in conjunction with the arrival of a sage. It is a good omen that brings rui ; roughly translated as "serenity" or "prosperity". It is often depicted with what looks like fire all over its body.

There is a strong argument that the Qilin is a stylised representation of the giraffe. This is because the Qilin is referred to only since the Ming Dynasty (see Variations below). The time of its first reference correspond in time roughly with the voyages of Zheng He. It is known that on Zheng He's voyage to East Africa (landing, among other places, in modern-day Kenya), the fleet brought back two giraffes to Beijing. It is also known that these two giraffes were referred to as "Qilins". The Emperor proclaimed the giraffes magical creatures, whose capture signalled the greatness of his power.

This argument is supported by some attributes of the Qilin, including its vegetarian and quiet nature. Its reputed ability to "walk on grass without disturbing it" may be related to the giraffe's long legs.

However, the opposing contention is that the Qilin was an existing myth, the name of which was borrowed and applied to the giraffes. Also, giraffes have much longer necks than some of the Ming-era depictions of the qilin.

The nature of the beast

Although it looks fearsome, the Qilin only punishes the wicked. It can walk on grass and yet not trample the blades and it can also walk on water. Being a peaceful creature, its diet does not include flesh. It takes great care when it walks never to tread on any living thing, and it is said to appear only in areas ruled by a wise and benevolent leader (some say even if this area is only a house). It is normally gentle but can become fierce if a pure person is threatened by a sinner, spouting flames from its mouth and exercising other fearsome powers that vary from story to story.

The Qilin is the lord of all beasts or hairy creatures (mammals), while the Phoenix represents the feathered, Man the naked, the Dragon the scaly and the Turtle the armored.

There are variations in the appearance of the qilin, even as seen in a single country such as China, owing to cultural differences between dynasties and regions.

File:MingQilinDragonFish.jpg
A Qilin in the dragon, fish, and ox style of the Ming Dynasty. Note the pair of horns.

In the Ming dynasty of China the Qilin is represented as an oxen-hooved animal with a dragon-like head surmounted by a pair of horns and flame-like head ornaments. In some representations, the flames that come from the Qilin's mouth contain a book which is actually Buddhist Sutras.

The qilin of China's subsequent Manchurian dominated Qing dynasty is a much more fanciful animal. Manchurian depictions of the qilin depict a creature with the head of a dragon, the antlers of a deer, the skin and scales of a fish, the hooves of an ox and tail of a lion.

In Japanese, the qilin is called kirin. Japanese art tends to depict the qilin as more deer-like than in Chinese art. Kirin Brewery Company, Ltd. is named after the animal, and the word kirin has also come to be used in modern Japanese for a giraffe. It's depicted as a dragon shaped like a European-style unicorn, only with a horse's tail instead of a lion's.

In the Chinese hierarchy of mythological animals, the qilin is ranked as the second most powerful creature (after the Chinese dragon), but in Japan, the kirin occupies the top spot.

In the Twelve Kingdoms anime series, based on the fantasy novels by Fuyumi Ono, the monarch of each kingdom is chosen by a kirin, who then becomes his (or her) principal counselor. The kirin's name is derived from the name of the kingdom plus either "ki" (male) or "rin" (female).

The spirit Shishi Gami in Hayao Miyazaki's animated film Princess Mononoke is also clearly derived from the kirin mythology. Other references can be found in the graphic novel Pet Shop of Horrors by Matsuri Akino, published by Tokyopop.

Kirin also makes an appearance as the strongest of the "gods" in Final Fantasy XI.

Part of this article consists of modified text from Wikipedia, and the article is therefore licensed under GFDL.
Retrieved from "https://www.monstropedia.org/index.php?title=Qilin&oldid=11114"
Categories: