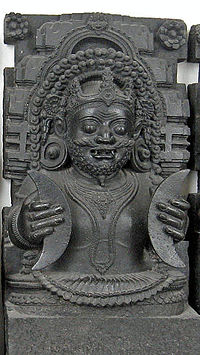 Rahu is a snake that swallows the sun or the moon causing eclipses in Hindu mythology.

Rahu is depicted in art as a dragon with no body, riding a chariot drawn by eight black horses.

According to legend,, Rahu drank some of the divine nectar during the Samudra manthan. But before the nectar could pass his throat, Mohini (the female avatar of Vishnu) cut off his head. The head, however, remained immortal. It is believed that this immortal head occasionally swallows the sun or the moon, causing eclipses. Then, the sun or moon passes through the opening at the neck that ends the eclipse.

Myth of Shiva and Rahu

Joseph Campbell paraphrased Shiva Purana in his book “The Power of Myth” and cited a myth of Shiva and Rahu:

In the myth of the Daitya king Jalandhara, Jalandhara sends Rahu with a message to Shiva, demanding that he surrender Parvati to Jalandhara. Shiva was angry at this message, and this anger took the form of a terrible creature which sprang from his brow. It had the face of a lion, flaming eyes, a body which was dry and rough to the touch, long arms and a tongue which lolled with anger. The creature rushed at Rahu, ready to devour him. Shiva apparently said something along the lines of "we don't shoot the messenger" whereon the gana pleaded to Shiva that it was tortured by hunger. Shiva told the gana that if it were so hungry, it should eat its own flesh. This the gana did, until only its head was left. Shiva, pleased with such devotion, appointed the gana as his door-keeper, ordering that it create terror for all wicked people. Shiva also ordained that the gana be worshipped along with his worship, and gave it the name Kirtimukha.

During his childhood, Hanuman famously flew towards the sun, as it appeared to be a big fruit. It was an eclipse day when Rahu arrived and terrified upon seeing Hanuman whose trying to swallow the sun. Hanuman caught Rahu in curiosity of the disembodied head.