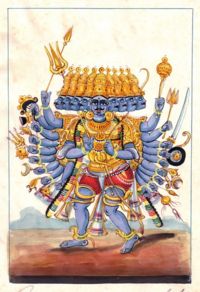 A depiction of Ravana

In Hinduism, Ravana (Devanagari: Rāvaṇa, रावण. Telugu: రావణాసురుడు ) is the king of Lanka, and of the rakshasas or demons. He is the principal antagonist of Rama in the Hindu epic, the Ramayana.

Ravana is depicted in art with up to ten heads, signifying his knowledge of the six shastras and the four vedas. His ten heads earned him the names Dashamukha (दशमुख, The Ten-faced), Dashagriva (दशग्रीव, The Ten-necked) and Dashakantha (दशकण्ठ, Ten Throats). Some say the ten heads were due to the reflections of a crystal necklace gifted to him by his father at the time of his birth or he had the mental strength of 10 people. He is portrated as having twenty hands, signifying greed and never-ending want.

At the time of the Ramayana, Ravana is shown as dominating all human and divine races - so much so that he can command the Sun as to his rising and setting.

Ravana was the master of 64 categories of knowledge. He had also the knowledge about the training of cows and elephants. Moreover, Brahma conferred on Ravana the boon of near invulnerability, making him immune from destruction by gods or (other) demons; he also acquired the capacity to change his form. He was endowed with the strength of moving the seas and splitting the tops of mountains. Ravana’s body bore all the marks of one who had fought the devas: the thunderbolt of Indra, the tusks of Indra’s elephant Airavata, and the discus of Vishnu had all scarred him.

If Ravana had a fatal flaw, it was doubtless his hubris. When Brahma conferred on him a boon, and Ravana asked that the devas should be unable to inflict harm on him, he did not think it worthwhile to ask for protection from men or animals.

Ravana was born to the the Brahmin sage known as Vishrava and the Daitya princess named Kaikesi. Kaikesi's father, Sumali, king of the Daityas, wished her to marry the most powerful being in the mortal world, so as to produce an exceptional heir. He rejected the kings of the world, as they were less powerful than him. Kaikesi searched among the sages, and finally chose Vishrava. Vishrava warned her that as she approached him at an inappropriate time, their children would tend towards evil, but accepted her nevertheless. As such, Ravana was partly Daitya, and partly Brahmin.

Ravana was the second eldest of children; Kubera - the god of wealth and Ravana's step-brother - being the eldest. His brothers were Vibhishana and Kumbhakarna. Through his mother, he was related to the daityas Maricha and Subahu. Kaikesi also produced a daughter, Meenakshi ("girl with fish like eyes"), although later she was dubbed the infamous Shoorpanakha ("the one with copper-colored fingernails").

His father Vishrava noted that while Ravana was aggressive and arrogant, he was also an exemplary scholar. Under Vishrava's tutelage, Ravana mastered the Vedas and the holy books and also the arts and ways of Kshatriyas (warriors). Ravana was also an excellent veena player and the sign of his flag had picture of veena on it. Sumali, his grandfather, worked hard in secret to ensure that he retained the ethics of the Daityas.

Following his initial training, Ravana performed an intense penance to Brahma (the creator god), lasting several years. Pleased with his austerity, Brahma offered him a boon. Ravana asked for immortality, which Brahma refused. Ravana then asked for absolute invulnerability and supremacy before gods and heavenly spirits, other demons, serpents and wild beasts. Contemptuous of mortal men, he did not ask for protection from them. Brahma granted him these boons, and additionally great strength by way of knowledge of divine weapons and sorcery.

After winning these boons, Ravana sought out his grandfather, Sumali, and assumed leadership over his army. He then set his sights on Lanka. 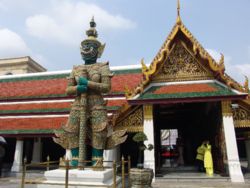 Lanka was an idyllic city, created by the celestial architect Vishwakarma for Kubera, the treasurer of the gods. Kubera had generously shared all that he owned with Kaikesi's children - his step-brothers and sister. However, Ravana demanded Lanka wholly from him, threatening to take it by force. Vishrava advised Kubera to give it up to him, as Ravana was now undefeatable.

While Ravana usurped Lanka to begin with, he was nevertheless regarded as a benevolent and effective ruler. Lanka flourished under his rule - it is said the poorest of houses had vessels of gold to eat and drink off, and hunger was unknown in the kingdom.

Following his conquest of Lanka, Ravana encountered Lord Shiva at his abode in Kailash. Unknowingly, Ravana attempted to uproot and move the mountain on a whim. Shiva, annoyed by Ravana's arrogance, pressed his little toe on Kailash, pinning him firmly and painfully under the same. His ganas informed Ravana of whom he had crossed, upon which Ravana became penitent. He composed and sang songs praising Shiva, and is said to have done so for thousands of years, till Shiva released him from his bondage. Pleased with his bravery and devotion, Shiva gave to him the divine sword Chandrahas ("Moon-blade"). It is during this incident that he acquires the name 'Ravana', meaning "(He) Of the terrifying roar", given to him by Shiva - the earth is said to have quaked at Ravana's cry of pain when the mountain was pinned on him. Ravana in turn became a lifelong devotee of Lord Shiva. Ravana is said to compose Shiva Tandava Stotra, a hymn to Lord Shiva. 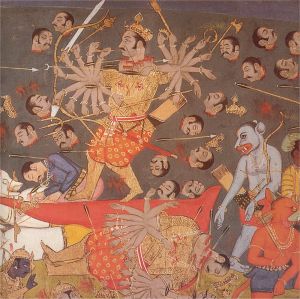 His abilities now truly awe-inspiring, Ravana proceeded on a series of campaigns, conquering humans, celestials and other demons. Conquering the netherworld completely, he left his brother Ahiravana as king. He became supreme overlord of all asuras in the three worlds, making an alliance with the Nivatakavachas and Kalakeyas, two clans he was unable to subdue. Conquering several kingdoms of the human world, he performed the suitable sacrifices and was crowned Emperor.

Kubera at one point chastised Ravana for his cruelty and greed, greatly angering him. Proceeding to the heavens, Ravana fought and defeated the devas, singling out his brother for particular humiliation. By force he gained command over the gods, celestials and the serpent races. 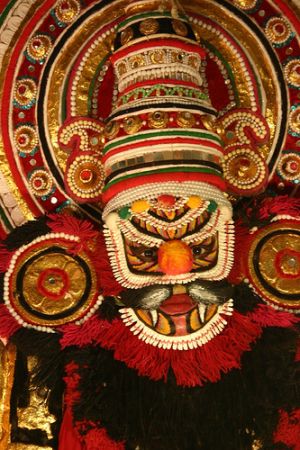 Ravana as depicted in Yakshagana, popular folk art of Karnataka

In the Bhagavata Purana, Ravana and his brother, Kumbakarna were said to be reincarnations of Jaya and Vijaya, gatekeepers at Vaikuntha, the abode of Vishnu and were cursed to be born in Earth for their insolence.

These gatekeepers refused entry to the Sanatha Kumara monks, who, because of their powers and austerity appeared as young children. For their insolence, the monks cursed them to be expelled from Vaikunta and to be born in Earth. The all-merciful Vishnu agreed that they should be punished but agreed to mitigate their curse. He asked them whether they would want to be undergo seven births as devotees of Vishnu or three births as enemies of the Lord. Since they wanted to get back as soon as possible, they agreed to be born in three births as enemies of God. 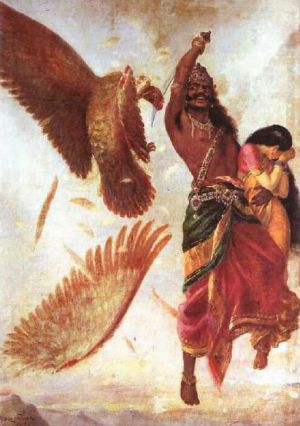 Ravana was known for his virility and his aggressive conquests of women. Ravana had several wives, foremost of whom was Mandodari - daughter of Mayasura and an apsara named Hema. Mandodari was renowned for her wisdom and grace as well as beauty and chastity. She is often compared to Sita, one of the most beautiful woman described in Indian mythology, for her beauty. In addition to his wives, Ravana maintained a harem of incredible size, populated with women whom he captured in his many conquests, many of them accepted and lived happily in his harem for his great manhood, power and knowledge in every direction. Ravana originally used to force himself upon any woman who rejected his advances. Two significant encounters occurred that would shape the course of the Ramayana.

The first was the molestation of the sage-woman Vedavati. Vedavati had been performing penance with the intention of winning Lord Vishnu as her husband. Ravana met her at her hermitage, her beauty enhanced by the austerities she had performed. She, however, rejected his advances. Ravana proceeded to forcibly take her, upon which she prophesied that she would return to the mortal world as the cause of his death. She then created a pyre and let herself be consumed in it.

The second was his encounter with the apsara Rambha, upon whom he forced himself. Rambha was betrothed to Kubera's son, but her plea that she was like a daughter to him did not deter Ravana. Angered at this, Kubera's son cursed Ravana, stating that his ten heads would fall off his head if he forced himself upon any woman from that point. This curse is said to have protected Sita's chastity while she was Ravana's captive for nearly a year.

This section deals with many members of Ravana's family. Since they are hardly mentioned outside the Ramayana, not much can be said about them. They are presented here as they are in the Ramayana, which is viewed by some as being only the point of view of Rama devotees, but is the most complete account of the story that is known.

Ravana was married to Mandodari, the daughter of the celestial architect Maya. He had seven sons from his three wives:

Ravana serves mainly as an antagonist and villain in the Ramayana, though sometimes he was shown as a great noble man. Nevertheless, he is considered to have possessed several virtues, the foremost being his knowledge of the sacred books, medicines and sorcery. Ravana was a great devotee of Shiva and is supposed to have composed the Shiva Tandava Stotra.

Legend says that being a Brahmin, Ravana performed the necessary vedic rituals (pujas) for Rama a Kshatriya before the war between himself and Rama. This was done as no other Brahmin was available at that time in Lanka.

There were occasions where Ravana has been humbled. For example, the encounter with Lord Shiva Himself as mentioned earlier. Once, Ravana is also said to have got himself tied into the tail of the mighty Vanara king Vali (while he was meditating), and Vali flew in all four directions performing his meditation, completely unaware that Ravana was stuck in his tail. When he reached his palace, he realized that Ravana was stuck there and released him. Another incident was when the king Kartavirya Arjuna (who had 1000 arms) was bathing in the river Narmada (where Ravana was also bathing). Arjuna's wives challenged him if he could hold the waters of Narmada, and he did it. Hence, the flow of water stopped at the place where Ravana was bathing and this made him angry. So he challenged Arjuna to battle and lost it. Arjuna then took him prisoner, until Ravana's grandfather came and asked Arjuna to release him. It is to Ravana's luck's credit, though, that he came out of all these three incidents much richer in alliances and friendship. Ravana also met his match when he encountered Vali. Once Ravana called Vali for a fight when Vali was doing his regular Shiva puja. He took Ravana in his tail and took around all worlds. Another version holds that since Vali derived half the power of the enemy, he accepted the offer from Ravana in spite of Ravana being the enemy of his father Indra.

Ravana, having known that Vali had the boon which said anyone who came before him lost half his/her strength to Vali, caught hold of Vali from behind. At this time, Vali was performing his sacred ablution. Such was the might of Vali that he clasped his arms around Ravana's. Vali, holding Ravana, completed his sacred bath in all the seven oceans.