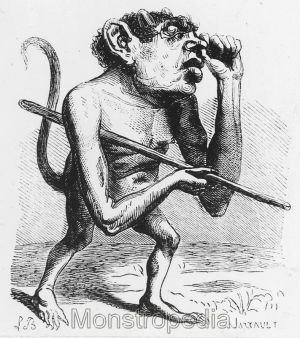 In demonology, Ronwe is a Marquis and Great Earl of Hell.

Ronwe is a Marquis and Great Earl of Hell, commanding nineteen legions of demons.

Ronwe is depicted as a monster with a ugly human face and a long monkey-like tail, holding a staff. He is often described as the taker of old souls; often coming to earth to harvest souls of decrepit humans and animals near death.

Ronwe teaches Rhetoric, languages, and gives good and loyal servants and the favour of friends and foes.

Ronove a marquesse and an earle, he is resembled to a monster, he bringeth singular understanding in rhetorike, faithfull servants, knowledge of toongs, favour of freends and foes; and nineteene legions obeie him. Pseudomonarchia daemonum - Johann Wier (1583)

The Twenty-seventh Spirit is Ronove. He appeareth in the Form of a Monster. He teacheth the Art of Rhetoric very well and giveth Good Servants, Knowledge of Tongues, and Favours with Friends or Foes. He is a Marquis and Great Earl; and there be under his command 19 Legions of Spirits. His Seal is this, etc. Goetia - S. L. MacGregor Mathers (1904)