The mythical salamander resembles the real salamander somewhat in appearance, but makes its home in fires, the hotter the better. Its alleged resistance to fire was such that it lived in volcanoes. Pliny believed its body was cold enough to extinguish flames. Its spittle was so poisonous that a man's hair would fall off his body at its touch. This creature's presence was believed to poison wells and orchards. 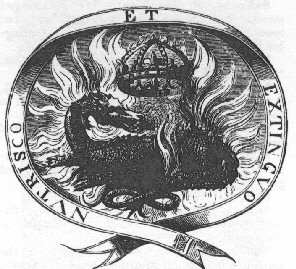 The crowned salamander of François 1er

The skin of the animal, which was known to resist the action of fire, came to be considered proof against that element. This cloth made of the skin/wool of salamanders was incombustible, and very valuable, for wrapping up precious items. These fireproof cloths appeared later to be composed of asbestos, a mineral, which is in fine filaments capable of being woven into a flexible cloth. The foundation of the above fables is supposed to be the fact that the salamander secrete from the pores of his body a milky juice, which when he is irritated is produced in considerable quantity, and would defend the body from fire.

Species of salamanders are numerous and found in the northern hemisphere in habitats near water or under some protection on moist ground, usually in a forest. Most are small but some reach up to 5 feet in length. They live in brooks and ponds and other moist locations restricted to mostly the northern hemisphere, with the exception of a few species living in the northernmost part of South America. North America has the hellbender and the mudpuppy which can reach the length of a foot or more. In Japan and China the giant salamander is found, which reaches 5 feet (1.5m) and weighs up to 30 kilograms <ref>"Digitally tagging and releasing".</ref><ref>"International Giant Salamander Protection Site".</ref>.

The salamander represents those who pass through the fires of passion and of this world without stain. Therefore, it stands for chastity, loyalty, impartiality, virginity, courage, Jesus, Mary, and the faithful. The salamander is also used to symbolize the flames, which it passes through, and so is a symbol of fire, temptation, and burning desire. It was considered the "king of fire" and as such was representative of Christ who would baptize with the flames of the Holy Spirit. Cloquet considers Christ the salamander king of fire because he passed through the fires of hell after his crucifixion without harm. King Francois I of France used a salamander as his personal emblem.

Early travelers to China were shown garments supposedly woven from salamander wool; the cloth was completely unharmed by fire. The garments had actually been weaving|woven from asbestos. Later Paracelsus suggested that the salamander was the elemental of fire. Because of this, salamanders have often been associated with dragons because of their connection with fire. These myths originate in Europe from the fire salamander, Salamandra salamandra, which hibernates in and under rotting logs. When logs were brought indoors and put on the fire, the animals mysteriously appeared from the flames.

The following is from the "Life of Benvenuto Cellini," an Italian artist of the sixteenth century, written by himself:

"When I was about five years of age, my father, happening to be in a little room in which they had been washing, and where there was a good fire of oak burning, looked into the flames and saw a little animal resembling a lizard, which could live in the hottest part of that element. Instantly perceiving what it was, he called for my sister and me, and after he had shown us the creature, he gave me a box on the ear. I fell a-crying, while he, soothing me with caresses, spoke these words: 'My dear child, I do not give you that blow for any fault you have committed, but that you may recollect that the little creature you see in the fire is a salamander; such a one as never was beheld before to my knowledge.' So saying he embraced me, and gave me some money."

"This animal is so intensely cold as to extinguish fire by its contact, in the same way that ice does. It spits out a milky matter from its mouth, and whatever part of the human body is touched with this all the hairs fall off, and the part assumes the appearance of leprosy."

"The Salamander is so called because it is strong against fire; and amid all poisons its power is the greatest. For other {poisonous animals} strike individuals; this slays very many at the same time; for if it crawls up a tree, it infects all the fruit with poison and slays those who eat it...It fights against fires, and alone among living things, extinguishes them. For it lives in the midst of flames without pain and without being consumed, and not only is it not burned, but it puts the fire out." (Brehaut, 1912)