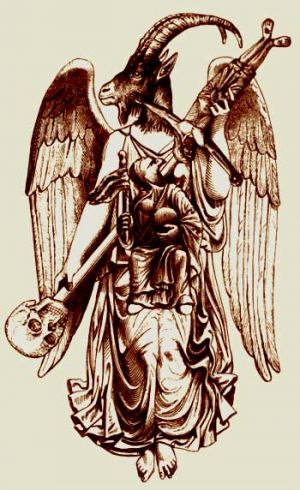 Samael is one of the seven Archangels and also believed to be the Angel of Death.

In Judaism and Christianity

In Jewish lore, Samael is said to be the Angel of Death, the chief ruler of the Fifth Heaven and one of the seven regents of the world served by two million angels; he resides in the Seventh Heaven.

Yalkut I, 110 of the Talmud speaks of Samael as Esau's guardian angel. In Sotah 10b, Samael is Esau's guardian angel, and in the Sayings of Rabbi Eliezer, he is charged with being the one who tempted Eve, then seduced and impregnated her with Cain. Though some sources identify Gadreel as the angel that seduced Eve, other Hebrew scholars say that it was Samael who tempted Eve in the guise of the Serpent. Samael is also sometimes identified as being the angelic antagonist who wrestled with Jacob, and also the angel who held back the arm of Abraham as he was about to sacrifice his son.

According to The Ascension of Moses (Chapter IV - Aggadah - The Legend of The Jews - By Louis Ginzberg) Samael is also mentioned as being in 7th Heaven:

"In the last heaven Moses saw two angels, each five hundred parasangs in height, forged out of chains of black fire and red fire, the angels Af, "Anger," and Hemah, "Wrath," whom God created at the beginning of the world, to execute His will. Moses was disquieted when he looked upon them, but Metatron embraced him, and said, "Moses, Moses, thou favorite of God, fear not, and be not terrified," and Moses became calm. There was another angel in the seventh heaven, different in appearance from all the others, and of frightful mien. His height was so great, it would have taken five hundred years to cover a distance equal to it, and from the crown of his head to the soles of his feet he was studded with glaring eyes, at the sight of which the beholder fell prostrate in awe. "This one," said Metatron, addressing Moses, "is Samael, who takes the soul away from man." "Whither goes he now?" asked Moses, and Metatron replied, "To fetch the soul of Job the pious." Thereupon Moses prayed to God in these words, "O may it be Thy will, my God and the God of my fathers, not to let me fall into the hands of this angel."

In The Holy Kabbalah (Arthur Edward Waite, 255), Samael is described as the "severity of God", and is listed as fifth of the archangels of the world of Briah. Samael is said to have taken Lilith as his bride after she left Adam. According to Zoharistic cabala, Samael was also mated with Eisheth Zenunim, Na'amah, and Agrat Bat Mahlat — all angels of prostitution.

Samael is sometimes confused in some books with Camael, an archangel of God, whose name means "He who sees God".

In the Apocryphon of John, found in the Nag Hammadi library, Samael is the third name of the demiurge, whose other names are Yaldabaoth and Saklas. In this context, Samael means "the blind god", the theme of blindness running throughout gnostic works. He is born out of the error of Sophia, who desires to create offspring of her own without the Spirit. His appearance is that of a lion-faced serpent. In On the Origin of the World in the Nag Hammadi library texts, he is also referred to as Azrael.

To anthroposophists, Samael is known as one of the seven archangels: Saint Gregory gives the seven archangels as Anael, Gabriel , Michael, Oriphiel, Raphael, Samael and Zachariel. They are all imagined to have a special assignment to act as a global Zeitgeist ('time spirit'), each for periods of about 380 years. Since 1879, anthroposophists posit, Michael has been the leading time spirit. Four important archangels are also supposed to display periodic spiritual activity over the seasons: Raphael during the spring, Uriel during the summer, Michael during the autumn, and Gabriel during the winter. In anthroposophy, archangels may be good or evil; in particular, some of their rank are collaborators of Ahriman, whose purpose (anthroposophists believe) is to alienate humanity from the spiritual world and promote materialism and heartless technical control.