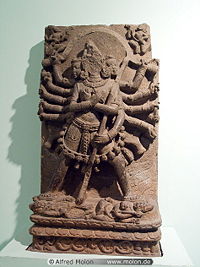 Sambara is a character in Hindu mythology who was married to Māyāvati.

In the Vishnu Purana it is mentioned that the demon Sambara kidnapped Pradyumna when he was six days old. THe later cast him into the sea. Pradyumna was swallowed by a large fish, but he did not die. The fish was caught by a fisherman, and gave the fish to the great asura, Sambara. His wife Mayadevi was then superintending the operations of the cooks and when the fish was cut open she saw a beautiful child.

Narada informed Mayadevi about who the child was and Mayavati took charge of the boy and carefully reared him from childhood, being fascinated by the beauty of the boy Pradyumna. The affection became still more impassioned when he was decorated with the bloom of adolescence. Mayavati fell in love with Pradyumna.

One day Pradyumna asked Mayavati, being a mother how is she feeling in love with her. Mayavati informed Pradyumna that he was not her son but of Lord Krishna and that her husband had stolen him and threw him into the sea. But Pradyumna did not die and was saved. When Pradyumna heard the story he was filled with wrath and defied Sambara to battle. After killing Sambara, Pradyumna married Mayavati.

Sambara was also a demon in the Vedas whose 99 fortresses were destroyed by Indra in the ecstasy of Soma while giving aid to Divodasa Athithigva. Indra finished off the demon in the hundredth.