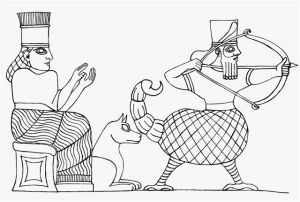 In Babylonian mythology scorpion men were the children of Tiamat, the dragon mother of the universe. They were also known as aqrabuamelu or girtablilu.

They had the head, arms, and torso of a giant man but below the waist they had the tails of scorpions. Their heads touch the sky, their "terror is awesome" and their "glance is death".

They were first created by the mother goddess Tiamat in order to wage war against the younger gods for the betrayal of her mate Apsu. Deadly warriors, they could fight either with their scorpion tails or their bows and arrows which never missed their targets.

Scorpion Man figurine that is #55 in the Monster in My Pocket series. Scorpion men feature as powerful myth units for the Egyptians in the game Age of Mythology.