Anonymous
×
Revision as of 00:03, 10 February 2011 by Admin (talk | contribs) (Created page with "thumb|SheepSquatch '''SheepSquatch''', also known as ''the white thing'' is a white woolly-haired beast that has been reported throughout the southwest...")
(diff) ← Older revision | Latest revision (diff) | Newer revision → (diff) 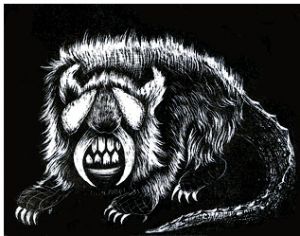 SheepSquatch, also known as the white thing is a white woolly-haired beast that has been reported throughout the southwestern region of the Virginia, USA.

SheepSquatch is described as being the size of a bear, with completely white wool-like fur. Its front limbs end in paw-like hands, similar to a raccoon’s but larger. The beast head is long and pointed, like a dog with long saber-like teeth and a single-pint horns like a young goat. SheepSquatch sports a long and hairless tail, similar to an opossum’s and is reputed to smell like sulfur.

The counties with the most sightings of Sheepsquatch are from Boone, Kanawha, Putnam, and Mason. A large surge in sightings took place in Boone County during the mid-1990s.

In 1994, a former Navy seaman witnessed the beast break through the forest. The white thing drank for a few minutes, then crossed the creek and continued on across toward the road. The navy seaman observed the animal for a while, and then it moved on into the surrounding brush.

Also in that same year, two children observed the beast while playing in the yard in Boone County. They saw what looked like a large white bear, and it stood up on its hind legs, which made it over six feet tall. Startled, the beast ran away through the forest, breaking medium-sized limbs off of trees as it went.

Another encounter a year later involved a car. A couple driving through Boone County noticed a large white beast sitting in the ditch along the road. They stopped their car to get a good look at it. It was described again as a large white animal with woolly fur about the size of a bear. In this instance, it was described as having “four eyes”. Then, it jumped out of the ditch and starts attacking the car. The couple drove off quickly, and when they got home noticed the large scratches on the side where the beast attacked.

Another incident occurred in 1999, this time a couple of campers were in the forest of Boone County at night around a campfire. They heard an animal snorting and scuffling around the camp, but it did not come into the light of the campfire. All of the sudden, the SheepSquatch appeared out of the darkness and charged at the campers. They jumped up and ran back to their house; all the while being pursued by the SheepSquatch. It stopped at the edge of the forest, however, and let out a terrible scream. Then it just turned around and headed back into the woods. The next morning, the campers examined their campsite and the trail home. It was torn up, they said, “like someone had tilled it up for gardening”.