In Greek mythology, Ipotanes were a race of half-horse, half-humans, unlike the satyrs, who were half-goat. 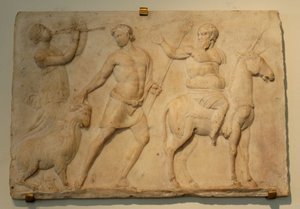 The typical Ipotane looked overall human, but had the legs, hindquarters, tail, and ears of a horse. However, some had humanlike rather than horselike legs (compare with early Centaurs, whose front legs were often humanlike).

The Sileni were Ipotanes who were followers of Dionysus. These Ipotanes were drunks, and looked mainly like other Ipotanes except that they were usually bald and fat with thick lips and squat noses, and had the legs of a human. Later, sileni lost the plural connotation and the only references were to one individual named Silenus, the teacher and faithful companion of the wine-god Dionysus.

A notorious consumer of wine, he was usually drunk and had to be supported by satyrs or carried by a donkey. Silenus was described as the oldest, wisest and most drunken of the followers of Dionysus, and was said in Orphic hymns to be the young god's tutor. This puts him in a company of phallic or half-animal tutors of the gods, a group that includes Priapus, Cedalion and Chiron, but also includes Pallas, the tutor of Athena (Kerenyi, 1951 p177)

When intoxicated, Silenus was said to possess special knowledge and the power of prophecy. The King Midas was eager to learn from Silenus and caught the old man by lacing a fountain from which Silenus often drank. As Silenus fell asleep, the king's servants seized and took him to their master.

Silenus shared with the king a pessimistic philosophy: that the best thing for a man is not to be born, and if born, should die as soon as possible.

An alternative story was when lost and wandering in Phrygia, he was rescued by peasants and taken to King Midas, who treated him kindly. Dionysus offered Midas a reward for his kindness, and Midas chose the power of turning everything he touched into gold. Another story was that Silenus has been captured by two shepherds, and regaled them with wondrous tales.

In Euripides's satyr play Cyclops, Silenus is stranded with the Satyrs in Sicily where they have been enslaved by the Cyclops. They are the comic elements of the story, which is basically a play on Homer's Odyssey IX. Silenus refers to the satyrs as his children during the play.

Silenus was also possibly a Latin term of abuse around 211BC, being used in Plautus' Rudens to describe Labrax, a treacherous pimp or leno, as "...a pot-bellied old Silenus, bald head, beefy, bushy eyebrows, scowling, twister, god-forsaken criminal"