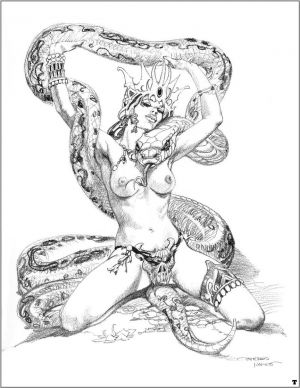 Snakes are central to many mythologies because of their perceived quality of being both familiar and exotic. The behaviour of snakes and their facial features (e.g. the unblinking, lidless eyes) seemed to imply that they were intelligent, that they lived by reason and not instinct, and yet their thought-processes were as alien to humans as their ways of movement.

In some cultures snakes were fertility symbols, for example the Hopi people of North America performed an annual snake dance to celebrate the union of Snake Youth (a Sky spirit) and Snake Girl (an Underworld spirit) and to renew fertility of Nature. During the dance, live snakes were handled and at the end of the dance the snakes were released into the fields to guarantee good crops. In other cultures snakes symbolized the umbilical cord, joining all humans to Mother Earth. The Great Goddess often had snakes as her familiars - sometimes twining around her sacred staff, as in ancient Crete - and they were worshiped as guardians of her mysteries of birth and regeneration.

The anthropomorphic basis of many myth-systems meant snake-gods were rarely depicted solely as snakes. Exceptions to this were the Fijian creator-god Ndengei, the dozen creator-gods of the Solomon Islands (each with different responsibilities), the Aztec Mother Goddess Coatlicue, and the Voodoo snake-spirits Damballah, Simbi and Petro. Snake-gods were more often portrayed as hybrids or shape-shifters; for example, North American snake-spirits could change between human and serpentine forms whilst keeping the characteristics of both.

The most important American snake-god was the Aztec spirit of intelligence and the wind, Quetzalcoatl (Plumed Serpent), who was balanced by the evil spirit of sacrifice, the Serpent of Obsidian Knives which was one of the four pillars supporting the sky. In each case, the association with snakes was based on imagery rather than snake-like qualities. The Mayan sky-goddess was a common attribute. However, in her case, the snakes leaned into her ears and whispered the secrets of the universe (i.e. the secrets of herself). In Indian myth, Shiva had a cobra coiled on his head and another at rest on his shoulder, ready to strike his enemies. Egyptian myth has had several snake-gods, from the 'coiled one' Mehen who assisted Ra in fighting Aapep every day to the two-headed Nehebkau who guarded the underworld. 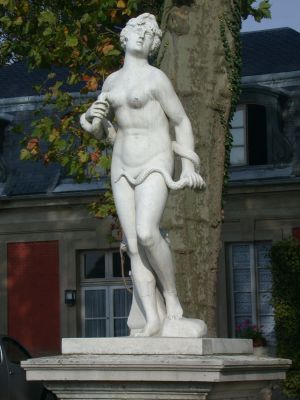 A statue in the park of Versailles

Some cultures regarded snakes as immortal because they appeared to be reincarnated from themselves when they sloughed their skins. Snakes were often also associated with immortality because they were observed biting their tails to form a circle and when they coiled they formed spirals. Both circles and spirals were seen as symbols of eternity. The circle was particularly important to Dahomeyan myth where the snake-god Danh circled the world like a belt, corsetting it and preventing it from flying apart in splinters. In ancient Egypt, the snake biting its tail symbolised the sea as the eternal ring which enclosed the world.

Snakes were associated with wisdom in many mythologies, perhaps due to the appearance of pondering their actions as they prepare to strike, which was copied by medicine men in the build-up to prophecy in parts of West Africa. Usually the wisdom of snakes was regarded as ancient and beneficial towards humans but sometimes it could be directed against humans. In East Asia snake-dragons watched over good harvests, rain, fertility and the cycle of the seasons, whilst in ancient Greece and India, snakes were considered to be lucky and snake-amulets were used as talismans against evil.

In northern Europe and West Asia, snakes were associated with healing whilst in parts of South Asia, snakes are regarded as possessing aphrodisiac qualities. Greek myth held that people could acquire second hearing and second sight if their ears or eyes were licked by a snake. Tiresias gained a dual male-female nature and an insight into the supernatural world when he killed two snakes which were coupling in the woods.

Hebrew myth relates that in the Garden of Eden, the Tree of Knowledge of Good and Evil had a snake-guardian; a story which was extended into the corruption of Eve in Judaic and Christian teachings and has led to the common perception in the West that humans and snakes were eternal opponents - a view shared by few myth-systems across the world.

In the state of Kerala, India, snake shrines occupy most households. Snakes were called upon by the creator of Kerala, Parasurama, to make the saline land fertile. The Mannarasala Shri Nagaraja Temple is one of the main centres of worship. The presiding deity here is Nagaraja - a five-headed snake god born to human parents as a blessing for their caretaking of snakes during a fire. It is believed that Nagaraja left his earthly life and took Samadhi but still resides in a chamber of the temple.

Snakes were a common feature of many creation myths, for example many peoples in Africa and Australia had myths about a Rainbow Snake, which was either Mother Earth herself giving birth to all animals or a water-god whose writhings created rivers, creeks and oceans. In ancient Indian myth, the drought-serpent Ahi or Vritra swallowed the primordial ocean and did not release all created beings until Indra split the serpents stomach with a thunderbolt. In another myth, the creator Brahma slept on the coils of the world-serpent Shesha (or Ananta the endless; a part of Vishnu, the child of the primordial waters). Shesha in turn was supported on Kurma (another part of Vishnu) and when Kurma moved, Shesha stirred and yawned and the gaping of its jaws caused earthquakes.

Greek cosmological myths tell of how Ophion the snake incubated the primordial egg from which all created things were born. In Egyptian myth, the state of existence before creation was symbolised as Amduat, a many-coiled serpent from which Ra the Sun and all of creation arose, returning each night and being reborn every morning.

Snakes and the underworld

Snakes were regularly regarded as guardians of the Underworld or messengers between the Upper and Lower worlds because they lived in cracks and holes in the ground. The Gorgons of Greek myth were snake-women (a common hybrid) whose gaze would turn flesh into stone. In Indian myth nagas and naginis were human-headed snakes whose kings and queens lived in jewel-encrusted underground or underwater paradises and who were perpetually at war with Garuda the Sun-bird. In Nordic myth, evil was symbolised by the serpent Nidhogg (the 'Dread Biter') who coiled around one of the three roots of Yggdrasil the Tree of Life, and tried to choke or gnaw the life from it. Similarly, in Egyptian myth every morning the serpent Aapep (symbolising chaos) attacked the Sunship (symbolising order). Aapep would try to engulf the ship and the sky was drenched red at dawn and dusk with its blood as the Sun defeated it. In ancient Slavic paganism a deity by the name of Volos presided over the underworld. He is almost always portrayed as a serpent or dragon depending on the particular myth. The underworld was part of a mythical world tree. The roots of this tree (usually growing in water) were guarded by Volos the serpent God.

The idea of snake-people living below the Earth was prominent in American myth. The Aztec underworld, Mictlan, was protected by python-trees, a gigantic alligator and a snake, all of which spirits had to evade by physical ducking and weaving or cunning, before they could start the journey towards immortality. In North America, the Brule Sioux people told of three brothers transformed into rattlesnakes which permanently helped and guided their human relatives. The Pomo people told of a woman who married a rattlesnake-prince and gave birth to four snake-children who freely moved between the two worlds of their parents. The Hopi people told of a young man who ventured into the underworld and married a snake-princess. Amongst the Navajo people is a tale of Glispa, a girl returned with magical healing lore after spending two years with the Snake People by the Lake of Emergence in the underworld. Healing and snakes were also associated in ancient Greek myth with Aesculapius, whose snake-familiars would crawl across the bodies of sick people asleep at night in his shrines and lick them back to health.

Snakes were also commonly associated with water especially myths about the primordial ocean being formed of a huge coiled snake as in Ahi/Vritra in early Indian myth and Jormungand in Nordic myth. Sea monsters lived in every ocean from the seven-headed crocodile-serpent Leviathan of Hebrew myth to the sea-god Koloowisi of the Zuni people of North America and the Greek monster Scylla with twelve snake-necks. In some cultures, eels (which spend their early lives in freshwater before returning to the sea as adults) were regarded as magical creatures.

Rivers and lakes often had snake-gods or snake-guardians including Untekhi the fearsome water-spirit of the Missouri River. Until recently, some northern European communities held well-dressing ceremonies to appease the snake-spirits which lived in village wells and told legends of saints defeating malevolent lake-snakes e.g. Saint George killing a maiden-devouring serpent or Saint Columba lecturing the Loch Ness Monster which then stopped eating humans and became shy of human visitors.

Carved stones depicting a seven-headed Cobra are commonly found near the sluices of the ancient irrigation tanks in Sri Lanka; these are believed to have been placed as guardians of the water.[1]

Part of this article consists of modified text from Wikipedia, and the article is therefore licensed under GFDL.
Retrieved from "https://www.monstropedia.org/index.php?title=Snake&oldid=11489"
Categories: