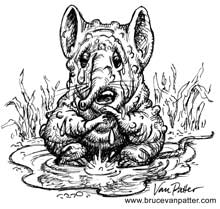 "The Squonk" by Richard Svensson

The Squonk is a legendary creature reputed to live in the Hemlock forests of northern Pennsylvania.

The squonk is a small and ugly creature. Its skin is ill-fitting, and covered with warts and other blemishes, therefore the squonk hides from being seen, and spends much of its time weeping sorrowfully over its own ugliness. Hunters can follow the trail of tears, and find the Squonk under hemlock trees.

Hunters who have attempted to catch squonks have found that the creature is capable of evading capture by dissolving completely into a pool of tears and bubbles when cornered. A certain J.P. Wentling is supposed to have coaxed one into a bag, which while he was carrying it home, suddenly lightened. On inspection, he found that the bag contained only the liquid remains of the sad animal.

Legends of squonks probably originated in the late nineteenth century, at the height of Pennsylvania's importance in the timber industry.

The earliest known written account of squonks comes from a book by William T Cox called Fearsome Creatures of the Lumberwoods, With a Few Desert and Mountain Beasts (1910). Mr. Cox's account is reprinted in Jorge Luis Borges' Book of Imaginary Beings (1969).

Squonks are also known in chemistry and biology. Some substances are stable in solution or some other "wild" form but cannot be isolated or captured without actually catalyzing their own polymerization or decomposition ("dissolving in their own tears"). For example, a molecule containing a carboxylic acid moiety and an acid labile moiety might be stable when initially prepared as the salt (e.g., barium prephenate) but unstable as the free acid (prephenic acid). Other examples can be found in: Toby J. Sommer, "Chemical Squonks", Chemical Innovation, 2000, 30 (April 2000), 24-32. ISSN 1527-4799. Chemical Abstracts: 133:73580 ; CAPlus: 2000:254494.

Part of this article consists of modified text from Wikipedia, and the article is therefore licensed under GFDL.
Retrieved from "https://www.monstropedia.org/index.php?title=Squonk&oldid=13883"
Categories: