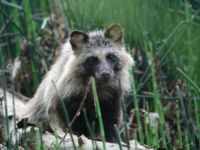 Picture of the animal.

Commonly called a "raccoon dog" in English, Tanuki is neither a raccoon nor badger. Its real name is Nyctereuctes procyonoides, a member of the dog family which resembles the raccoon in having dark facial markings that contrast with its yellowish brown coat, but does not have a ringed tail and walk its toes like a dog.

However while tanuki are prominent in Japanese folklore and proverbs, they were not always distinguished from other animals. In local dialects, tanuki and mujina (狢, kyujitai: 貉) can refer to raccoon dogs or badgers. An animal known as tanuki in one region may be known as mujina in another region. In modern Tokyo standard dialect, tanuki refers to raccoon dogs and anaguma refers to badgers. Regional dishes known as tanuki-jiru ("tanuki soup") may contain either raccoon dog or badger, although the taste of the latter is often preferred.

Tanuki is often illustrated as a male jolly little bear-like animal, wearing a large straw hat and carrying a bottle of sake behind his monstrous scrotum or testicles, sometimes mistaken for his equally rotund belly. By blowing air and pulling, the tanuki can stretch his scrotum into a vast sheet exceeding eight tatami mats in size. Sometimes only exceptionally clever tanuki called mamedanuki are said to be able to do this. The tanuki in comic art is portrayed employing his expanded testicles in numerous ways - he may use them as a raincoat or a blanket, a boat or a blunt weapon, he may disguise them as another yokai such as a rokuro-kubi or a tengu in order to frighten his fellow raccoon dogs, or he may even traipse through a landscape made up entirely of hairy, wrinkled scrotal skin. The mame-danuki in particular is said to transform its testicular expanse into rooms and invite humans in to do business, but often a lit cigarette dropped on the "floor" will break the illusion and send the revealed animal fleeing and yelping in pain. The tanuki is also said to be fond of coming out at dusk and drumming on its plump belly and distended kin-tama ("golden balls"), filling the night air with the deep hollow sound of pon-poko-pon as a drum, to produce confusion or illusions. 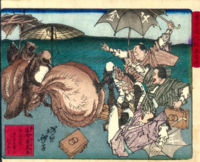 Tanuki with typically enlarged scrotum, in a print by Tsukioka Yoshitoshi.

In Japanese folklore the Tanuki has great physical strength and supernatural powers. Like the kitsune (fox), it is a master of shapeshifting and disguise and is a mischievous creature taking all sorts of disguises to deceive or annoy travellers. It will perform various tricks to get such things as saké, food, or women to the point of turning itself into inanimate objects, such as the tea-kettle in the famous story of the Bunbukuchagama.

Unlike foxes and kitsune, tanuki usually have their own agenda and are prone to cause chaos and confusion amongst humans and, sometimes, other youkai. Tanuki can at times become violent or unpleasant if drunk or deprived of his favorite drinks. 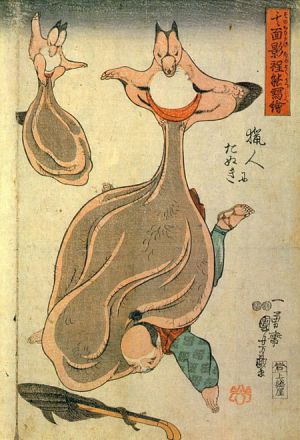 The comical image of the tanuki is thought to have developed during the Kamakura era. The actual wild tanuki has unusually large testicles, a feature that has inspired humorous exaggeration in artistic depictions of the creature. Tanuki may be shown with their testicles flung over their backs like travellers' packs, or using them as drums. As tanuki are also typically depicted as having large bellies, they may be depicted as drumming on their bellies instead of their testicles -- particularly in contemporary art.

A common schoolyard song in Japan (the tune of which can be heard in the arcade game Ponpoko and a variation of which is sung in the Studio Ghibli film Pom Poko) makes explicit reference to the tanuki's anatomy:

Roughly translated, this means "Tan-tan-tanuki's/Raccoon-raccoon-raccoon dog's testicles, there isn't even any wind but still go swing-swing-swing".[1] It then proceeds to continue for several verses, with many regional variations. It is sung to the melody of an American Baptist hymn called Shall We Gather At The River?.

During the Kamakura and Muromachi eras, some stories began to include more sinister tanuki. The Otogizoshi story of "Kachi-kachi Yama" features a tanuki that clubs an old lady to death and serves her to her unknowing husband as "old lady soup," an ironic twist on the folkloric recipe known as "tanuki soup". Other stories report tanuki as being harmless and productive members of society. Several shrines have stories of past priests who were tanuki in disguise. Shapeshifting tanuki are sometimes believed to be tsukumogami, a transformation of the souls of household goods that were used for one hundred years or more.

A popular tale known as Bunbuku chagama is about a tanuki who fooled a monk by transforming into a tea-kettle. Another is about a tanuki who tricked a hunter by disguising his arms as tree boughs, until he spread both arms at the same time and fell off the tree. Tanuki are said to cheat merchants with leaves they have magically disguised as paper money. Some stories describe tanuki as using leaves as part of their own shape-shifting magic.

The tanuki of Shikoku seem especially prone to going to war. In Ehime prefecture an audacious tanuki named Inugami-gyobu had a band of eight hundred and eight followers, and layed plans to capture Matsuyama Castle, but the tanuki were all defeated and sealed up in a cave by a hero wielding a magic wooden hammer. Another famous tanuki battle took place in Tokushima prefecture, when the tanuki hero Kincho got into a feud with his tanuki mentor Rokuemon, and all the raccoon dogs in the area wound up participating in the fight. In the end Rokuemon was defeated and Kincho died from his wounds, but a human friend of Kincho's erected a shrine in his honor which is still visited today.

In metalworking, tanuki skins were often used for thinning gold. As a result, tanuki became associated with precious metals and metalwork. Small tanuki statues were marketed as front yard decoration and good luck charm for bringing in prosperity. Also, this is why tanuki is described as having large kintama (?? lit. gold ball, means a testicle in Japanese slang).

Statues of tanuki can be found outside many Japanese temples and restaurants, especially noodle shops. These statues often wear big, cone-shaped hats and carry bottles of sake in one hand, and a promissory note (a bill it will never pay) or empty purse in the other hand. Tanuki statues always have large bellies. Older depictions of the tanuki show them as having large testicles as well, although this feature is often omitted in contemporary sculpture.

In the past, the animal was hunted in Japan for its meat, its black-brown fur (used for making brushes) and its bones, which were reputed to have medicinal qualities. They were introduced to the western parts of the former U.S.S.R. for fur farming. Some escaped (or were released), and since the 1950s have spread westward into Scandinavia, and south even as far as France.

Part of this article consists of modified text from Wikipedia, and the article is therefore licensed under GFDL.
Retrieved from "https://www.monstropedia.org/index.php?title=Tanuki&oldid=11152"
Categories: