In Greek mythology, Tethys (/ˈtiːθɪs, ˈtɛθɪs/; Ancient Greek: Τηθύς, romanized: Tēthýs) was a Titan daughter of Uranus and Gaia, a sister and wife of the Titan Oceanus, and the mother of the river gods and the Oceanids. 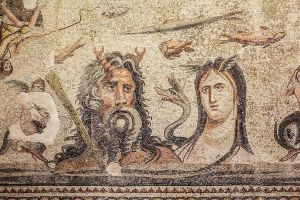 Tethys was one of the Titan offspring of Uranus (Sky) and Gaia (Earth).Hesiod lists her Titan siblings as Oceanus, Coeus, Crius, Hyperion, Iapetus, Theia, Rhea, Themis, Mnemosyne, Phoebe, and Cronus. Tethys married her brother Oceanus, an enormous river encircling the world, and was by him the mother of numerous sons (the river gods) and numerous daughters (the Oceanids).

According to Hesiod, there were three thousand (i.e. innumerable) river gods. These included Achelous, the god of the Achelous River, the largest river in Greece, who gave his daughter in marriage to Alcmaeon and was defeated by Heracles in a wrestling contest for the right to marry Deianira;Alpheus, who fell in love with the nymph Arethusa and pursued her to Syracuse, where she was transformed into a spring by Artemis; and Scamander who fought on the side of the Trojans during the Trojan War and, offended when Achilles polluted his waters with a large number of Trojan corpses, overflowed his banks nearly drowning Achilles.

Tethys played no active part in Greek mythology. The only early story concerning Tethys is what Homer has Hera briefly relate in the Iliad’s Deception of Zeus passage. There, Hera says that when Zeus was in the process of deposing Cronus, she was given by her mother Rhea to Tethys and Oceanus for safekeeping and that they "lovingly nursed and cherished me in their halls".Hera relates this while dissembling that she is on her way to visit Oceanus and Tethys in the hopes of reconciling her foster parents, who are angry with each other and are no longer having sexual relations.

Originally Oceanus' consort, at a later time Tethys came to be identified with the sea, and in Hellenistic and Roman poetry Tethys' name came to be used as a poetic term for the sea.

The only other story involving Tethys is an apparently late astral myth concerning the polar constellation Ursa Major (the Great Bear), which was thought to represent the catasterism of Callisto who was transformed into a bear and placed by Zeus among the stars. The myth explains why the constellation never sets below the horizon, saying that since Callisto had been Zeus's lover, she was forbidden by Tethys from "touching Ocean's deep" out of concern for her foster-child Hera, Zeus's jealous wife.

Claudian wrote that Tethys nursed two of her nephlings in her breast, Helios and Selene, the children of her siblings Hyperion and Theia, during their infancy, when their light was weak and had not yet grown into their older, more luminous selves.

In Ovid's Metamorphoses, Tethys turns Aesacus into a diving bird.

Tethys was sometimes confused with another sea goddess, the sea-nymph Thetis, wife of Peleus and mother of Achilles.