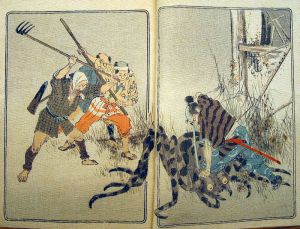 The name means "ground spider", likely due to perceived physical traits that were later exaggerated or embellished. A spider-limbed monster of the same name appears in some Japanese folktales, which possibly were mythical retellings of battles against these peoples. According to Japanese History, Japanese people used "Tsuchigumo" as a derogatory term for bandits and thieves, akin to the Tsuchigumo that lived under the ground and in caves.

The most famous example is that of Minamoto no Raiko. In this story, Raiko investigates tales of a giant skull flying through the air. He and his retainers chase the skull, but it eludes them. It is during this chase that he finds a youth named Kintaro. Raiko, impressed by Kintaro's strength, initiated him as one of his retainers and continued on his venture. The search for the skull proves fruitless, and Raiko retires for the night. At the house where they stay, Raiko finds himself feeling ill, and a young servant boy brings him medicine daily, under the pretence of helping him to recover. Raiko continues to grow ill, and begins to suspect the boy of mischief. One day, he waits for the daily visit and then lashes out, striking the boy and causing him to run from the house. This breaks a powerful illusion, and Raiko finds himself covered in a spider's web. His retainers free him, and together they track down the boy by his trail of blood. They follow it into the mountains, and there find a huge spider, dead from a wound.

There are many alternate tellings of this popular story. In another famous version, instead of being a small boy, the Tsuchigumo appears as a beautiful woman leading an army of Yokai. Raiko's retainers prepare to battle the Yokai, but Raiko avoids them and strikes the woman, causing the Yokai to disappear as if an illusion. He then follows the woman to a cave in the mountains where she transforms into a great spider. After a battle, Raiko splits her open. Even after the Tsuchigumo's death, several thousand spiders the size of human infants are said to have crawled from its belly. Raiko and his retainers claim total victory only after having made sure every last one is slain. Raiko was wielding a sword named "Kumokirimaru" meaning spider-cutter.

Another telling shows the Tsuchigumo in a positive light. In this tale the Tsuchigumo is captured by Raiko. He vows to save Raiko's life three times. In the end he keeps his word. The last time he rescues Raiko he is cast into the sea. some tales say he becomes a crab, another version tells of a rescue of the spider by another demon.

It is believed that Tsuchigumo were a people of ancient Japan, believed to have lived in the Japanese Alps until at least the Asuka period. At the time of the story of Raikou, it is possible that they might have been marginalized and discriminated against.

Part of this article consists of modified text from Wikipedia, and the article is therefore licensed under GFDL.
Retrieved from "https://www.monstropedia.org/index.php?title=Tsuchigumo&oldid=15186"
Categories: