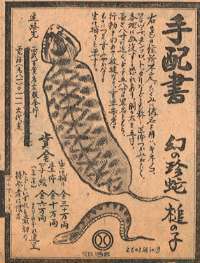 The tsuchinoko (ツチノコ), is a legendary snake-like cryptid from Japan; the creature is known as bachi hebi in Northeastern Japan.

Tsuchinoko are described as being between 30 and 80 centimeters in length, similar in appearance to a snake, but with a central girth that is much wider than its head or tail, and as having fangs and venom similar to that of a viper. to jump up to a meter in distance.

According to legend, some tsuchinoko have the ability to speak and a propensity for lying, as well as a taste for alcohol. Legend also records that it will sometimes swallow its own tail so that it can roll like a hoop. Some accounts also describe the tsuchinoko as being able to leap great distances.

Tsuchinoko seem to be generally peaceful and solitary creatures who dislike undue attention.

Drawings resembling tsuchinoko on stoneware dating back to the Jomon Period have been discovered in Gifu and Nagano. An encyclopedia from the Edo Period contains a description of the tsuchinoko under the name yatsui hebi. Accounts of the tsuchinoko can also be found in the Kojiki.

In 1989 the town of Mikata, Hyogo Prefecture offered a reward of 330 square meters of land to anybody who could capture a tsuchinoko and, in 2001, it put a large black snake on display under the claim that the creature was a tsuchinoko.

Excluding Hokkaido and the southern Japanese islands, tsuchinoko sightings have been reported all over Japan. As an actual tsuchinoko has never been formally cataloged by science, there is some speculation that other animals have been mistaken for the creature. Some believe the tsuchinoko legend to be based on encounters with snakes that recently swallowed a meal. The blue-tongued lizard, which became legal to own in Japan in the 1970s, also seems to be easily mistakable for a tsuchinoko; its only major difference in appearance is its four legs.

Part of this article consists of modified text from Wikipedia, and the article is therefore licensed under GFDL.
Retrieved from "https://www.monstropedia.org/index.php?title=Tsuchinoko&oldid=11190"
Categories: