Illustration by Hubert de Lartigue - The Sword of Evil - All rights reserved.

In Norse mythology the valkyries are dísir, minor female deities, who are described as battle-maidens who ride in the ranks of the gods or serve the drinks in Valhalla.

From Old Norse Valkyrja lit. "Choosers of the Slain".

It seems that there is no clear distinction between the valkyries and the norns. Skuld is for instance both a valkyrie and a norn, and in the Darraðarljóð (lines 1-52), the valkyries weave the web of war (see below). According to the Prose Edda (Gylfaginning 36), “Odin sends the valkyries to every battle. They allot death to men and govern victory. Gunnr and Róta two valkyries and the youngest norn, called Skuld, always ride to choose who shall be slain and to govern the killings”.

The valkyries' purpose was to choose the most heroic of those who had died in battle and to carry them off to Valhalla where they became einherjar. This was necessary because Odin needed warriors to fight at his side at the preordained battle at the end of the world, Ragnarök. In Valhalla the valkyries also “serve drink and look after the tableware and drinking vessels” (Prose Edda Gylfaginning 36).

In modern art, the valkyries are sometimes depicted as beautiful shieldmaidens on winged horses, armed with helmets and spears. However, valkyrie horse was a kenning for wolf (see Rök Stone), so contrary to the stereotype, they did not ride winged horses but instead packs of wolves that frequented the corpses of dead warriors.

Whereas the wolf was the valkyrie's mount, the valkyrie herself appears to be akin to the raven, flying over the battlefield and "choosing" corpses. Thus, the packs of wolves and ravens that scavenged the aftermath of battles may have been seen as serving a higher purpose.

According to Thomas Bulfinch's highly influential work Bulfinch's Mythology (1855), the armour of the valkyries "sheds a strange flickering light, which flashes up over the northern skies, making what men call the 'Aurora Borealis', or 'Northern Lights'.

A Valkyrie is waiting with two drinking horns at the gates of Valhalla on the Tjängvide image stone from Gotland, in the Swedish Museum of National Antiquities in Stockholm. 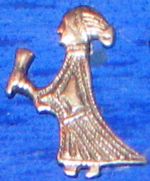 A Valkyrie silver figurine, in the Swedish Museum of National Antiquities in Stockholm.

It is now believed that the original valkyries were the priestesses of Odin who officiated at sacrificial rites in which prisoners were executed (“given to Odin”). These priestesses sometimes carried out the sacrifices themselves, which involved the use of a ritual spear. By the time the Poetic Edda came to be compiled in the late 12th or early 13th century, these rituals had given rise to legends of supernatural battle-maidens who took an active part in human conflict, deciding who should live and who should die (Davidson 1964). 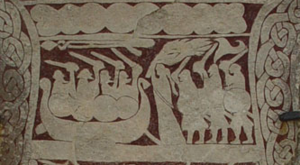 Hildr, in a detail from the Stora Hammar stone an image stone on Gotland

In the mythological poems of the Poetic Edda the valkyries are supernatural deities of unknown parentage; they are described as battle-maidens who ride in the ranks of the gods or serve the drinks in Valhalla; they are invariably given unworldly names like Skogul (“Raging”), Hlokk (“Shrieking”) and Gjoll (“Screaming”).

In the Heroic lays, however, the valkyries are described as bands of warrior-women only the leader of whom is ever named. She is invariably a human woman, the beautiful daughter of a great king, though she shares some of the supernatural abilities of her anonymous companions. In the first of the three Helgi Lays, Helgi Hjörvarðsson is accosted by a band of nine valkyries the leader of whom, Svava, is the daughter of a king called Eylimi. In the second and third lays, the valkyries are led by Sigrun, who is the daughter of King Hogni; she marries the hero Helgi Hundingsbani and bears him sons. The most famous of the valkyries, Brynhildr, is also a human princess. In the Sigrdrífumál (The Ballad of the Victory-Bringer) she is never named, being called simply Sigrdrífa (“Victory-Bringer”), and there are only hints that she is not a deity; what's more, we are told nothing of her parentage. In the corresponding passage in the Volsunga saga, however, she is identified as Brynhildr, the daughter of King Budli. (Sigrdrífa is also identified with Brynhildr in another heroic lay, Helreið Brynhildar, or Bryndhildr's Ride to Hel.)

Richard Wagner incorporated Norse tales that included the valkyrie Brünnhilde (Brynhildr) and her punishment and subsequent love for the warrior Siegfried (Sigurðr). These works included his opera Die Walküre, which contains the well known Ride of the Valkyries, as well as others of his oeuvre, Siegfried and Götterdämmerung. These depictions and others have subsequently led to modern representations of valkyries less as figures of death and warfare and more commonly as romanticized, pristine white and gold clad figures riding winged horses. 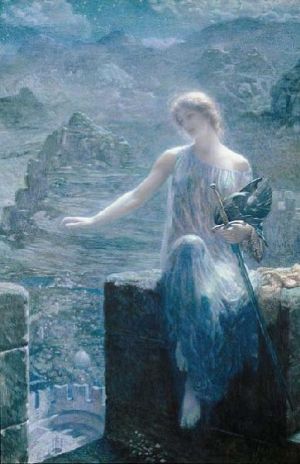 Apart from the well known valkyries above, many more valkyrie names occur in our sources. In the nafnaþulur addition to Snorri Sturluson's Edda the following strophes are found. 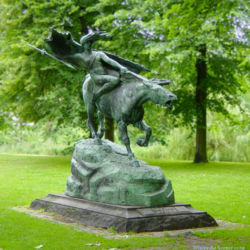 A statue from 1908 by Stephan Sinding located in Copenhagen. 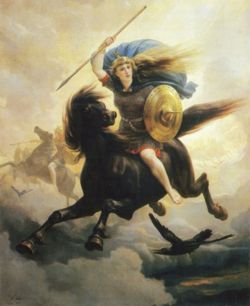 In Grímnismál we have Odin reciting the following stanza.

In Völuspá there are still more names.

More are mentioned in Darraðarljóð (lines 1-52), a poem where their connection with the Norns is evident:

As can be seen from the above, several of the names exist in different versions. Many of them have a readily apparent warlike meaning - Hjörþrimul, for example, means "battle of swords" while Geirahöð means "battle of spears".

To what an extent this multitude of names ever represented individual mythological beings with separate characteristics is debatable. It is likely that many of them were never more than names and in any case only a few occur in extant myths.

In Gylfaginning of the Prose Edda and the poem Grimnismál of the Poetic Edda, it is said that Freyja receives half of the slain heroes in her hall Fólkvangr, however there are no descriptions about life at Fólkvangr, at least not in surviving tales.

In Skáldskaparmál, Freyja is called "Possessor of the Slain" (Eidandi Valfalls), and in Njal's Saga, another title of Freyja is mentioned: Valfreyja "Mistress of the Chosen", and Mistress of the Valkyries in general[10] (cf. Valfadir, Valkyrja).

Snorri Sturluson wrote that "whenever she rides into battles, she gets half of the slain, and Odin half" (The Prose Edda, Gylfaginning (24)) . Freyja is also called Vanadís, which suggests that she is related to the dísir. Like the Valkyries, Freyja also sometimes pours the wine at banquets of the Æsir (The Prose Edda, Skáldskaparmál (17)).

Part of this article consists of modified text from Wikipedia, and the article is therefore licensed under GFDL.
Retrieved from "https://www.monstropedia.org/index.php?title=Valkyrie&oldid=11229"
Categories: