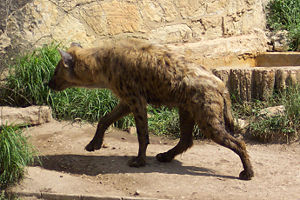 Werehyenas are mythological creatures capable of assuming the shape of hyenas. They are present in the stories of several African and Eurasian cultures.

Like the werewolves of European folklore, werehyenas are depicted as shapeshifters, though unlike werewolves which are usually portrayed as being originally human, some werehyena lore tells of how they can also be hyenas disguised as humans.

In the Borno State in Nigeria, werehyenas are referred to as bultungin which translates into "I change myself into a hyena". It was once traditionally believed that one or two of the villages in the region was populated entirely by werehyenas.

In Ethiopia, it is traditionally believed that every blacksmith, whose trade is hereditary, is really a wizard with the power to change into a hyena. These blacksmith werehyenas are believed to rob graves at midnight and are referred to as bouda (also spelled buda). They are viewed with suspicion by most countrymen. Many Ethiopian Christians characterize Ethiopian Jews as being bouda, accusing them of unearthing Christian corpses and consuming them; the commonality of blacksmithing as a traditional profession for Jewish men in Ethiopia may be a reason for the connection between the two beliefs.

Belief in the bouda is also present in Sudan, Tanzania and Morocco where the Berber people regard the bouda as a man who nightly turns into a hyena and resumes human shape at dawn.

In the folklore of western Sudanic peoples, a human-hyena hybrid creature is depicted as a cannibalistic monster who nightly transforms and terrorizes people, especially lovers. The creature is often portrayed to be a magically powerful healer, blacksmith, or woodcutter in its human form, recognizable through different signs such as a hairy body, red and gleaming eyes and a nasal voice.

Members of the Korè cult of the Bambara people in Mali “become” hyenas by imitating the animals behaviour through masks and roleplays. These are evocative of the hyenas' reviled habits, and may also be used to invoke fear among the participants into avoiding such habits and traits in their own lives.

Al-Doumairy in his writings in Hawayan Al-Koubra (1406) that hyenas were vampiric creatures that attacked people at night and sucked the blood from their necks. Arab folklore tells of how hyenas can mesmerise victims with their eyes or sometimes with their pheromones.

A Persian medical treatise written in 1376 tells how to cure people known as kaftar, who are said to be “half-man, half-hyena”, who have the habit of slaughtering children.

The Greeks, until the end of the 19th century, believed that the bodies of werewolves, if not destroyed, would haunt battlefields as vampiric hyenas which drank the blood of dying soldiers.