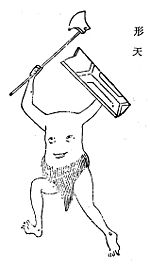 Xingtian from the Qing Edition Shanhaijing

刑天 means "punished one" or "he who was punished by heaven"

According to oracle bones, during ancient times the giant Xíng Tiān was originally a follower of the Emperor Yán. After the victory of the Yellow Emperor over Yán at the Battle of Banquan, Xíng Tiān followed his master to exile in the south. At this time, the giant had no name.

The Yellow Emperor came forth and the two engaged in a ferocious combat, sword (昆吾剑) against axe, all the way down to earth to ChángYáng Mountain (常羊之山). In a final blow, the Yellow Emperor distracted his opponent with a trick and lunged ... and in a flash decapitated Xíng Tiān, whose head rolled all the way to the foot of the mountain and created a thunderous roar. 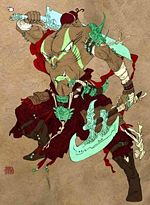 The dance of arms, fierce would last to the end; replaced the head by the abdomen, the emperor’s punishment for me does nothing to be possible to be afraid!

Instead of dying, Xíng Tiān was able to continue moving and began groping about for his head. The Yellow Emperor raised his sword to strike the mountain. The mountain split open, the head rolled within and the mountain closed again.

Xíng Tiān gave up looking for his head, and instead used his nipples as eyes that could not see, and navel as a mouth that could not open. He began striking about wildly, giving rise to the saying "刑天舞干戚，猛志固常在" (undying resolution). Thereafter, the headless giant got his name, which meant "He whose head was chopped off".