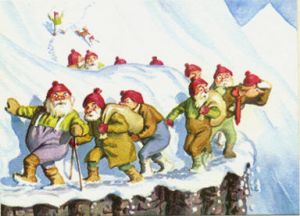 The Yule Lads are occasionally depicted as wearing the costume traditionally worn by Santa Claus, but are otherwise generally shown wearing late medieval style Icelandic clothing. They are often depicted with the Yule Cat, a beast that, according to folklore, eats children that don't receive new clothes in time for Christmas.

The Yule Lads were originally portrayed as mischievous, and even criminal, pranksters that would steal from, or in other way harass the population in rural areas. In 1932 the poem "Jólasveinarnir" was published as a part of the popular poetry book "Jólin Koma" ("Christmas Arrives") by Icelandic poet Jóhannes úr Kötlum. The poem reintroduced Icelandic society to Icelandic Yuletide folklore and established what is now considered the 'official' thirteen Yule Lads, their personalities and connection to other folkloric characters. In modern times the Yule Lads have been depicted as taking on a more benevolent role comparable to Santa Claus and other related figures and putting small gifts (or potatoes if the child has misbehaved) into shoes placed by children into their windows the last thirteen nights before Christmas Eve.

The Yule lads are said to "come to town" during the last 13 nights before Christmas, each staying for two weeks before departing. Below are the 'official' thirteen Yule Lads in the order they arrive (and depart).