In Russian folklore, the zhar-ptitsa is a magical firebird from a faraway land, which is both a blessing and bringer of doom to its captor. 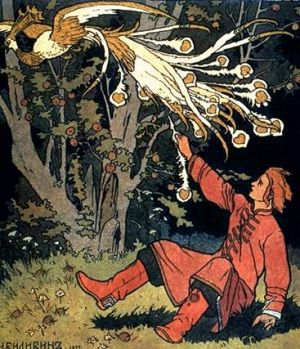 The zhar-ptitsa is invariably described as a large bird in majestic plumage that brightly glows in red, orange and yellow light, like a bonfire that is just past the turbulent flame. The feathers do not cease glowing if removed, and one feather can light a large room if not concealed. In later iconography, the form of zhar-ptitsa is usually as of a smallish peacock of fire colors, complete with a crest on its head and tail feathers with glowing "eyes".

Some tales say that when the firebird flies around his eyes sparkle and pearls fall from his beak. The pearls would then fall to the peasants, giving them something to trade for good or services. A typical role of the zhar-ptitsa in fairy tales is an object of difficult quest. The quest is usually initiated by finding a lost tail feather of the zhar-ptitsa, upon which the hero sets out to find and capture the live bird, sometimes on his own accord, but usually on the bidding of a father or king. The zhar-ptitsa is a marvel, highly coveted, but the hero, initially charmed by the wonder of the feather, eventually blames it for his troubles.

The story of the zhar-ptitsa comes in many different forms but follow the classical scheme of fairy tale. The hero is warned by feathers serving as a premonition of hard journey and magical helpers met on the way, help for the travel and capture of the Bird, and eventually returning from the faraway land with the prize. The most popular version is found in the tale of Ivan Tsarevich and the Grey Wolf. Another version of the legend is a tsar commands his three sons to capture the zhar-ptitsa that keeps flying down from above and eating his apples. The golden apples are in the tsar’s orchard and give youth and strength to all who eat them. The sons end up barely missing the bird but they catch one of his feathers that glows in the night. They take it in a dark room and it lights the room up completely. The mystery of the feather has illuminated hearts of men for many years.

The story of zhar-ptitsa quest has inspired literary works, including "The Little Humpback Horse" by Pyotr Yershov. Composer Stravinsky achieved an early success with a large-scale ballet score, The Firebird.

Part of this article consists of modified text from Wikipedia, and the article is therefore licensed under GFDL.
Retrieved from "https://www.monstropedia.org/index.php?title=Zhar-ptitsa&oldid=9523"
Categories: