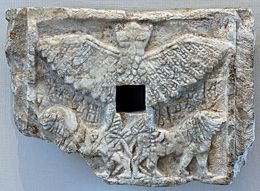 In Persian and Sumerian mythology, Zu, also known as Anzu and Imdugud is a demon.

From Sumerian An: heaven and Zu: far.

Zu is said to be the son of the bird goddess Siris or conceived by the pure waters of the Apsu-gods and the wide Earth.

Like Siris, Zu is described as a massive bird which can breathe fire and water, although Zu is alternately seen as a lion-headed eagle.

In Sumero-Akkadian mythology, Zu is a divine storm-bird and the personification of the southern wind and the thunder clouds. Zu was a servant of the chief sky god Enlil, guard of the throne in Enlil's sanctuary, (possibly previously a symbol of Anu), from whom Anzu stole the Tablet of Destinies and hid them on a mountaintop, so hoping to control the fate of all things. In one version of the legend, the gods sent Lugalbanda to retrieve the tablets, who in turn, killed Anzu. In another, Ea and Belet-Ili conceived Ninurta for the purpose of retrieving the tablets. In a third legend, found in The Hymn of Ashurbanipal, Marduk is said to have killed Anzu.

In another legend--that of Etana--the mother serpent, addressing the sun god, Shamash, says:

Thy net is like unto the broad earth;
Thy snare is like unto the distant heaven!
Who hath ever escaped from thy net?
Even Zu, the worker of evil, who raised the head of evil [did not escape]!
L. W. King's Translation.