Amphisbaena (plural: amphisbaenae) also called the Mother of Ants, is a mythological, ant-eating serpent with a head at each end. 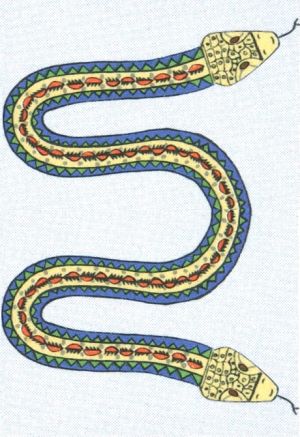 According to Greek mythology, the mythological amphisbaena was spawned from the blood that dripped from Medusa the Gorgon's head as Perseus flew over the Libyan Desert with it in his hand.

Cato's army then encountered it along with other serpents on the march. Amphisbaenae fed off of the corpses left behind.

The earlier descriptions of the amphisbaena depict what looks basically like a snake (perhaps an Indian Sand Boa), but with a head at either end. However, medieval and later drawings often show it with two or more scaled feet, particularly chicken feet and feathered wings. Some even depict it with horns on the front head and small, round ears on the other, or horns on both heads.

These horns are long and either curved upwards or slightly spiraled. Also, some show it with the second head on the end of its tail, while others have both "necks" of equal size so that it cannot be determined which is the rear head.

Many descriptions of the amphisbaena say its eyes glow like candles or lightning, but the poet Nicander seems to contradict this by describing it as "always dull of eye". He also says: "From either end protrudes a blunt chin; each is far from each other."

Pliny:" the amphisbaena has a twin head, that is one at the tail end as well, as though it were not enough for poison to be poured out of one mouth."

Sir Thomas Browne: " a smaller kind of Serpent, which moveth forward and backward, hath two heads...Which double formations do often happen unto multiparous generations, more especially that of Serpents; whose productions being numerous, and their Eggs in chains or links together (which sometime conjoyn and inoculate into each other) they may unite into various shapes and come out in mixed formations." (Pseudodoxia Epidemica)

As well as a legendary creature referenced by ancient historians and a monster from Greek mythology, the amphisbaena is a heraldic creature.

Amphibanes, or Amphibenes is a heraldic term indicating the crest: "on a Saltire or, interlaced by two Amphisbaenae azure langued gules a rose of the last barbed and seeded purpure". This was the crest of Gwilt.

In plain English, this means a rose with purple thorns and seeds interlaced by two blue, red-tongued amphisbaenae, with a yellow X in the background.

The amphisbaena has been referred to by the poets, such as Nicander, John Milton, Alexander Pope, and Lord Tennyson and the amphisbaena as a mythological and legendary creature has been referenced by Lucan, Pliny the Elder, Isidore of Seville, Sir Thomas Browne, the last of which debunked its existence.

There are 158 different species of worm lizards in the zoological suborder Amphisbaenia. One of these species is probably the origin of this legend. An excellent herpetological resource is the EMBL Reptile Database, which has all of the different species listed and pictures. [[1]]

Part of this article consists of modified text from Wikipedia, and the article is therefore licensed under GFDL.
Retrieved from "https://www.monstropedia.org/index.php?title=Amphisbaena&oldid=15069"
Categories: