The Ouroboros, (Ourorboros, Oroborus, Uroboros or Uroborus) is an ancient serpent or dragon swallowing its own tail and forming a circle. The ouroboros has been important in religious and mythological symbolism, but has also been frequently used in alchemical illustrations. More recently, it has been interpreted by psychologists, such as Carl Jung, as having an archetypal significance to the human psyche. 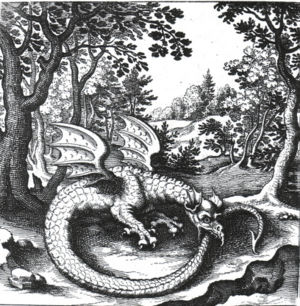 The ouroboros is usually depicted in the form of a snake swallowing its tail, and is usually circular, although it is sometimes depicted in a lemniscate shape. Plato described a self-eating, circular being as the first living thing in the universe — an immortal, perfectly constructed animal.

"The living being had no need of eyes when there was nothing remaining outside him to be seen; nor of ears when there was nothing to be heard; and there was no surrounding atmosphere to be breathed; nor would there have been any use of organs by the help of which he might receive his food or get rid of what he had already digested, since there was nothing which went from him or came into him: for there was nothing beside him. Of design he was created thus, his own waste providing his own food, and all that he did or suffered taking place in and by himself. For the Creator conceived that a being which was self-sufficient would be far more excellent than one which lacked anything; and, as he had no need to take anything or defend himself against any one, the Creator did not think it necessary to bestow upon him hands: nor had he any need of feet, nor of the whole apparatus of walking; but the movement suited to his spherical form was assigned to him, being of all the seven that which is most appropriate to mind and intelligence; and he was made to move in the same manner and on the same spot, within his own limits revolving in a circle. All the other six motions were taken away from him, and he was made not to partake of their deviations. And as this circular movement required no feet, the universe was created without legs and without feet."

In some representations the serpent is shown as half light and half dark, echoing symbols such as the Yin Yang, which illustrates the dual nature of all things, but more importantly, that these opposites are not in conflict. A double ouroboros (two creatures swallowing one another) in alchemy signifies volatility.

The serpent biting, devouring, eating its own tail symbolises the cyclic Nature of the Universe: creation out of destruction, Life out of Death. The ouroboros eats its own tail to sustain its life, in an eternal cycle of renewal. It is also an emblem of immortality. Its endless representation with its tail in its mouth (Ouroboros), and the constant renewal of its skin and vigor, enliven the symbols of continued youth and eternity. Alchemically, the ouroboros is also used as a purifying glyph. He is the basilisk, the alchemical serpent.

The Ouroboros often represents self-reflexivity or cyclicality, especially in the sense of something constantly re-creating itself, the eternal return, and other things perceived as cycles that begin anew as soon as they end (See Phoenix (mythology)). It can also represent the idea of primordial unity. The Jungian psychologist Erich Neumann writes of it as a representation of the pre-ego "dawn state", depicting the undifferentiated infancy experience of both mankind and the individual child.

The Ouroboros could very well be used to symbolize the closed-system model of the universe of some physicists. The organic chemist August Kekulé claimed that a ring in the shape of Ouroboros that he saw in a dream inspired him in his discovery of the structure of benzene. As noted by Carl Jung, this might be an instance of cryptomnesia. 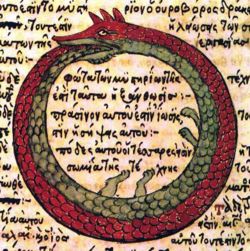 The Ouroboros is one of the oldest mystical symbols in the world. The serpent or dragon appears in Aztec, Middle East, and Native American mythologies, among others. The depiction of the serpent is believed to have been inspired by the Milky Way, as some ancient texts refer to a serpent of light residing in the heavens.

The serpent or dragon eating its own tail can be traced back to Ancient Egypt, circa 1600 BCE where it represented the travels of the sun disk. From ancient Egypt it passed to Phoenicia and then to the Greek philosophers, who gave it the name Ouroboros ("tail-devourer").

In Norse mythology it appears as the serpent Jörmungandr, one of the three children of Loki and Angrboda, who grew so large that it could encircle the world and grasp its tail in its teeth. In the legends of Ragnar Lodbrok, such as Ragnarssona þáttr, the Geatish king Herraud gives a small lindorm as a gift to his daughter Þóra Town-Hart after which it grows into a large serpent which encircles the girl's bower and bites itself in the tail. The serpent is slain by Ragnar Lodbrok who marries Þóra. Ragnar later has a son with another woman named Kráka and this son is born with the image of a white snake in one eye. This snake encircled the iris and bit itself in the tail, and the son was named Sigurd Snake-in-the-Eye.

In Gnosticism, this serpent is related to the solar God Abraxas and signified eternity and the soul of the world.

Christianity adopted the ouroboros as a symbol of the limited confines of the material world (that there is an "outside" being implied by the demarcation of an inside), and the self-consuming transitory nature of a mere "worldly existence" of this world, following in the footsteps of the preacher in Ecclesiastes 3:9-14. G. K. Chesterton, in The Everlasting Man, uses it as a symbol of the circular and self-defeating nature of pantheistic mysticism and of most modern philosophy.

Additionally, the ouroboros has been incorporated into the crests of the Hungarian and Romanian Unitarian churches.

Snakes are sacred animals in many West African religions. The demi-god Aidophedo uses the image of a serpent biting its own tail. The oroburus is also seen in fon or dahomean iconography as well as in yoruba imagery as Oshunmare

The god Quetzalcoatl is sometimes portrayed as an ouroboros on Aztec and Toltec ruins.

In alchemy, the ouroboros is a purifying sigil that represents the spirit of Mercury (the substance that permeates all matter) and symbolizes continuous renewal, the cycle of life and death, and harmony of opposites. It keeps the cosmic waters under control, and is symbolic of the cyclical nature of alchemical work. Swiss psychologist Carl Jung saw the ourobouros as an archetype and the basic mandala of alchemy. Jung also defined the relationship of the ouroboros to alchemy:

he alchemists, who in their own way knew more about the nature of the individuation process than we moderns do, expressed this paradox through the symbol of the uroboros, the snake that eats its own tail. ouroboros, has been said to have a meaning of infinity or wholeness. In the age-old image of the uroboros lies the thought of devouring oneself and turning oneself into a circulatory process, for it was clear to the more astute alchemists that the prima materia of the art was man himself. The uroboros is a dramatic symbol for the integration and assimilation of the opposite, i.e. of the shadow. This 'feed-back' process is at the same time a symbol of immortality, since it is said of the uroboros that he slays himself and brings himself to life, fertilises himself and gives birth to himself. He symbolises the One, who proceeds from the clash of opposites, and he therefore constitutes the secret of the prima materia which [...] unquestionably stems from man's unconscious.

The famous ouroboros drawing from the early alchemical text The Chrysopoeia of Cleopatra dating to 2nd century Alexandria encloses the words hen to pan, "one, the all", i.e. "All is One". Its black-and-white halves represent the Gnostic duality of existence.

As a symbol of the eternal unity of all things, the cycle of birth and death from which the alchemist sought release and liberation, it was familiar to the alchemist/physician Sir Thomas Browne. In his A letter to a friend, a medical treatise full of case-histories and witty speculations upon the human condition, he wrote of it:

[...] that the first day should make the last, that the Tail of the Snake should return into its Mouth precisely at that time, and they should wind up upon the day of their Nativity, is indeed a remarkable Coincidence,

It is also alluded to at the conclusion of Browne's The Garden of Cyrus (1658) as a symbol of the circular nature and Unity of the two Discourses:

All things began in order so shall they end, so shall they begin again according to the Ordainer of Order and the mystical mathematicks of the City of Heaven.

The ouroboros may have been the origin of 8 (a lemniscate, the symbol used for infinity in mathematics.)

Part of this article consists of modified text from Wikipedia, and the article is therefore licensed under GFDL.
Retrieved from "https://www.monstropedia.org/index.php?title=Ouroboros&oldid=9880"
Categories: