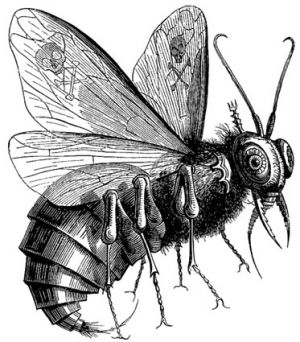 Ba‘al Zebûb might mean either 'Lord of Zebûb', referring to an unknown place called Zebûb, or 'Lord of flies' (zebûb being a Hebrew collective noun for 'fly'). This may mean the Hebrews were denigrating their enemies' god by referring to him as dung. Thomas Kelly Cheyne suggested that it might be a corruption of Ba'al Zebul, 'Lord of the High Place'. The SeptuagintA renders the name as Baalzeboub, SeptuagintB as Baal myîan 'Baal of flies', but Symmachus the Ebionite may have reflected a tradition of its offensive ancient name when he rendered it as Beelzeboul (Catholic Encyclopedia).

In any case the form Beelzebub was substituted for Belzebul in the Syriac translation and Latin Vulgate translation of the gospels and this substitution was repeated in the King James Version of the Bible, the result of which is the form Beelzebul was mostly unknown to western European and descendant cultures until some more recent translations restored it. In summary, it is unknown if either or both of these names were a title applied to persons, to divinities exclusively, or otherwise were a corruption of such a title, possibly as a denigration.

In ancient contexts, there appears to have been little, if any, meaningful distinction between Beelzebub and the polytheistic Semitic god named Ba‘al. Monotheistic Jewish reference to Baal was almost certainly pejorative, and grew to be used among other terms for Satan. Hence the name also later appears as the name of a demon or devil, often interchanged with Beelzebul.

Examination has sought to interpret the meaning of Baal in context to determine the specific reasons for this connotation, and varied religious speculations have run the gamut. It is generally unknown whether and to what extent the anti-pagan sentiment of early Hebrews was based in an anti-martriarchal view, or else a developed dislike for the customary pagan fertility rites. Regardless, the demonization of the deity or deification is thought to have been one basis for the personification of Satan as the adversary of the Abrahamic god, though other influences such as the Zoroastrian Daeva may have contributed.

In Books of Kings 1.2–3,6,16, King Ahaziah of Israel, after seriously injuring himself in a fall, sends messengers to inquire of Ba‘al Zebûb, the god of the Philistine city of Ekron, to learn if he will recover. Elijah the Prophet then condemns Ahaziah to die by Yahweh's words because Ahaziah sought council from Ba‘al Zebûb rather than from Yahweh.

In Mark 3.22, the Pharisees accuse Jesus of driving out demons by the power of Beelzeboul, prince of demons, the name also appearing in the expanded version in Matthew 12.24,27 and Luke 11.15,18–19. The name also occurs in Matthew 10.25. It is unknown whether Symmachus was correct in identifying these names or not since we otherwise know nothing about either of them. Zeboul might derive from a slurred pronunciation of zebûb; from 'zebel', a word used to mean 'dung' in the Targums; or from Hebrew zebûl found in 1 Kings 8.13 in the phrase bêt-zebûl 'lofty house' and used in Rabbinical writings to mean 'house' or 'temple' and also as the name for the fourth heaven.

In the Testament of Solomon, Beelzebul (not Beelzebub) appears as prince of the demons and says (6.2) that he was formerly a leading heavenly angel who was (6.7) associated with the star Hesperus (which is the normal Greek name for the planet Venus (Αφροδíτη) as evening star). Seemingly Beelzebul is here simply Satan/Lucifer. Beelzebul claims to cause destruction through tyrants, to cause demons to be worshipped among men, to excite priests to lust, to cause jealousies in cities and murders, and to bring on war.

Texts of the Acts of Pilate (also known as the Gospel of Nicodemus) vary in whether they use Beelzebul or Beezebub. The name is used by Hades as a secondary name for Satan. But it may vary with each translation of the text, other versions give the name Beelzebub as Beelzebub, but separates him from Satan.

In Christian writings, the name Beelzebub or Beelzebul may appear as an alternate name for Satan (or the Devil) or may else appear to refer to the name of a lesser devil. As with several religions, the names of any earlier foreign or "pagan" deities often became synonymous with the concept of an adversarial entity.

Part of this article consists of modified text from Wikipedia, and the article is therefore licensed under GFDL.
Retrieved from "https://www.monstropedia.org/index.php?title=Beelzebub&oldid=14575"
Categories: