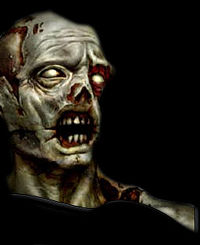 In Hinduism and Buddhism, a Bhūta (Pl: bhutas) is a type of evil spirit. The word Bhut is still used in Hindi to categorize a ghost.

The Bhuta or Prét is the evil ghost of a man who died an untimely death like execution, accident, or suicide or leaded an unholy or immoral life. This kind of reincarnation does not arise out of birth from a womb, etc, but is achieved directly, and such evil spirits' fate is pre-determined as to how they shall achieve liberation from that yoni, and re-enter the world of mortal flesh through next incarnation.

Bhutas appear as flickering lights or misty apparitions that cast no shadows and linger above the ground.

Bhutas haunt forests and empty dwellings by day and night.

Bhutas usually wander around animating dead bodies at night and may attack the living like a ghoul, ultimately reaping its victim's flesh. They can be detected by nasal twangs, fear of burning turmeric and lack of shadow. They mostly plague those who do not performer the proper funerary rites for the dead.

Bhutas are considered responsible for:

They are also said to enter a human body and make sicken it until death.

People protect themselves by lying on the ground, because the bhutas never rest on earth. In the Bhagvad Gita, Krishna the Avatar declares that the humans who worship bhutas become bhutas themselves; this is part of a larger discourse wherein the Avatar tells Prince Arjuna that the worshipper and the worshipped ultimately become one. The word "Bhut" is still used in Hindi to categorize a ghost.

Ghosts are an important part of folklore in Bengal. Fairy tales, both old and new often use the concept of ghosts. In modern day Bengali literature as well, references to ghosts may be often found. It is believed that the spirits of those who cannot find peace in the afterlife or die unnatural deaths remain on Earth. The common word for ghosts in Bengali is bhut (Bengali: ভূত).

There are different and distinct types of ghosts in Bengal. Some of the more prominent are:

These ghosts are often shown to be fond of fish and are attracted to the smell of fish. A curious aspect of female ghosts, petnis, is that their feet are said to be backwards.

Part of this article consists of modified text from Wikipedia, and the article is therefore licensed under GFDL.
Retrieved from "https://www.monstropedia.org/index.php?title=Bhuta&oldid=12904"
Categories: