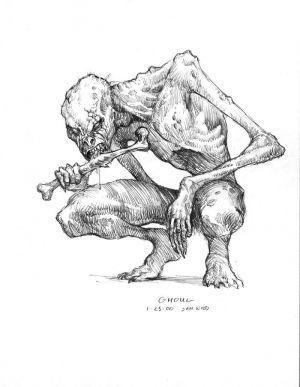 A ghoul is a monster from ancient Arabian folklore that dwells in graveyards and other uninhabited places. The ghul is a devilish type of jinn believed to be sired by Iblis.

Its female form is given as ghouleh in Muhawi and Kanaana.

Ghoul is also the name for a desert-dwelling, shapeshifting demon that can assume the guise of an animal, especially a hyena. It lures unwary travelers into the desert wastes to slay and devour them. The creature also preys on young children, robs graves, and eats the dead. Because of the latter habit, the word ghoul is sometimes used to refer to an ordinary human such as a grave robbers, or to anyone who enjoys the macabre. The term has also been used to describe cannibals such as Jeffrey Dahmer.

The star Algol takes its name from this creature, as stated from Jim Kaler, Prof. Emeritus of Astronomy at the University of Illinois.

The English term comes from the Arabic name for the creature, which literally means demon.

In modern fiction, ghouls are often confused with other types of undead, usually the mindless varieties of Vampires and Zombies.

Although modern fiction, particularly 1954's I Am Legend, by author Richard Matheson, , suggests that the latter beings share cannibalistic habits with ghouls, it is nonetheless generally believed that vampires and zombies prefer to prey upon human beings.

Bram Stoker's novel Dracula features a ghoulish character named Renfield. Under the vampire's influence, Renfield becomes his willing slave and develops a craving to eat living creatures in the hope of obtaining their life-force for himself. After being confined to an asylum, he considers eating a human hospital orderly, but finds he can only capture and consume flies, spiders, and the occasional bird.

In the fiction of H. P. Lovecraft, a ghoul is a member of a nocturnal, subterranean race. Some ghouls were once human, but a diet of human corpses, and perhaps the tutelage of proper ghouls, mutated them into horrific, bestial humanoids. In the short story Pickman's Model, the first of Lovecraft's ghoul stories, they are unutterably terrible monsters; however, in his earlier novella The Dream-Quest of Unknown Kadath (1926), the ghouls are somewhat less disturbing, even comical at times, and both helpful and loyal to the protagonist. Similar themes appear in The Lurking Fear (1922) and The Rats in the Walls(1924), both of which posit the existence of subterranean clans of degenerate, retrogressive cannibals or carrion-eating humans.

In 1987, Brian McNaughton wrote a series of dark fantasy short stories in which these Lovecraftian ghouls are the protagonists. The stories, collectively published as Throne of Bones, were a critical success and the book went on to receive a World Fantasy Award for Best Collection.

In Larry Niven's Ringworld series, the ghouls are a race that eats the dead of the other races that live on the ringworld. They have a fairly sophisticated (for a post-apocalyptic people) culture, and are the only race with a communication system that traverses the entire ringworld.

In J.K. Rowling's Harry Potter series, ghouls are harmless creatures that live in the homes of wizards, making loud noises and occasionally groaning.

In The Chronicles of Narnia, ghouls are creatures that serve the White Witch. They resemble corroded, old humans. In the 2005 movie and videogame, they resemble pale orcs carrying spears.

In Laurell K. Hamilton's Anita Blake series, graveyards became infested with ghouls when the blessing of the graveyard was used up; this was usually caused when too many zombies were raised or voodoo rituals of evil nature were performed in the graveyard. Though they were once human, they are like pack animals, and they aren't very smart. They will only attack if a person is vulnerable. A ghoul will run from a healthy, strong human being.

In Max Brooks' The Zombie Survival Guide: Complete Protection from the Undead , zombies are frequently referred to as ghouls.

In Jim Butcher's The Dresden Files, ghouls are much like they are in the classic mythologies. They are humanoid monsters that feed on human flesh, and seem to be able to disguise themselves as ordinary humans. These ghouls are intelligent, as opposed to being mindless and feral monsters.

Although many screenplays have featured ghouls, the first major motion picture of this theme was the 1933 British film entitled The Ghoul. Boris Karloff plays a dying Egyptologist who possesses an occult gem, known as The Eternal Light, which he believes will grant immortality if he is buried with it, and thereby able to present it to Anubis in the afterlife. Of course, his bickering, covetous heirs and associates would rather keep the jewel for themselves. Karloff vows to rise from his grave and avenge himself against anyone who meddles with his plan, and he keeps this promise when one of his colleagues steals The Eternal Light after his death.

In 1968, George A. Romero's groundbreaking film Night of the Living Dead combined reanimated corpses (zombies) with cannibalistic monsters (ghouls), creating new film monsters more terrifying than either of their predecessors.

In the anime and manga series Hellsing, ghouls are zombie-like creatures that are created when a technological vampire drains a victim to death, or, in the Manga, where a vampire drains the blood of someone who is not a virgin. If fatally wounded, they instantly crumble to dust.

Part of this article consists of modified text from Wikipedia, and the article is therefore licensed under GFDL.
Retrieved from "https://www.monstropedia.org/index.php?title=Ghoul&oldid=9056"
Categories: