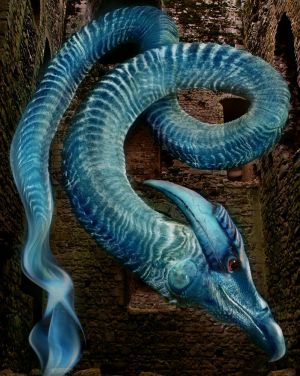 The Minhocão is an amphibian creature similar to a huge earthworm that reputedly exists in the forests of South America.

Minhocão is derived from 'minhoca' meaning 'earthworm' in Portuguese.

According to legend, Boi-tatá was a big serpent which survived a great deluge. To save itself, it entered a cave and rested in the darkness for centuries, so that its eyes grew. After it left the cave, it went through the fields looking for the bodies of animals to eat, but also sometimes attacked people and animals.

The beast is said to have the appearance of a giant worm, with scaly black skin and a pair of tentacle-like structures protruding from its head. The length of the creature has been reported as being as great as at least 25 meters (82 ft) long and a meter (3.28 ft) thick, capable of overturning boats, capturing livestock and dragging it under the water, besides digging enormous subterranean trenches.

The Minhocão is commonly blamed for houses and roads collapsing into the earth. It is also said to frequently visit the local lakes and rivers of the areas in which it's reported.

Sightings of the Minhocão were mostly reported fin the 19th century with emphasis in the 'São Francisco' river region. The first published reference to the Minhocão appeared in the American Journal of Science in an article written by Auguste de Saint-Hilaire. In the article Saint-Hilaire stated several instances where a Minhocão was seen near fords of rivers. All of instances he reported took place in the Brazilian province of Goyaz.

Publications regarding the Minhocão ceased until 1877, when zoologist Fritz Müller wrote an article on the beast for a German publication Zoologische Garten. Müller's article included new information on the Minhocão, including reports of huge mysterious trenches that were so big they'd divert rivers and destroy orchards. Unlike Saint-Hilaire's article, Müller's included actual sightings of the Minhocão. The following is of one of these sightings, which took place in the Paranà State in the 1840s:

A black woman going to draw water from a pool near a house one morning ... saw a short distance off an animal which she described as being as large as a house moving off along the ground. ... In the same district a young man saw a huge pine suddenly overturned ... he found the surrounding earth in movement, and an enormous worm-like black animal in the middle of it, about twenty-five meters long, and with two horns on its head.

Müller also mentioned a story told by Lebino José dos Santos who had heard tales of a dead Minhocão being found near Arapehy, Uruguay. According to the tale the creature was found lodged between two rocks, the reputed skin was said to be "as thick as the bark of a pine-tree" and armored with "scales like those of an armadillo". A sighting of a live Minhocão near Lages, Brazil in 1870 by Francisco de Amaral Varella, he said he:

... saw lying on the bank of the Rio das Caveiras a strange animal of gigantic size, nearly one meter in thickness, not very long, and with a snout like a pig, but whether it had legs or not he could not tell. ... whilst calling his neighbors to his assistance, it vanished, not without leaving palpable marks behind it in the shape of a trench ...

With the end of the 19th century also came the end of Minhocão sightings. There are still large mysterious trenches from time to time, but no actual sightings.

Some researchers believe that the Minhocão, sadly, went extinct, while others think it is more likely that Minhocãos are still seen, but end up being reported as giant anacondas.

Part of this article consists of modified text from Wikipedia, and the article is therefore licensed under GFDL.
Retrieved from "https://www.monstropedia.org/index.php?title=Minhocao&oldid=13939"
Categories: