Bokkenrijders (meaning ‘buckriders’ or ‘goatriders’) were a devilish gang of highwaymen, who would fly through the nightly sky on their goats.

They made a pact with the devil and swore on “the dead hand”. They would appeared out of nothing, flying on their bucks, with eyes glowing in the dark then disappeared into thin air. 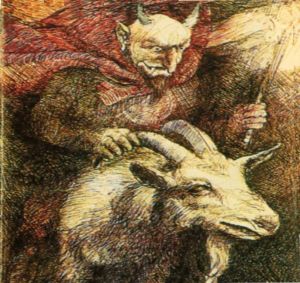 Bokkenrijder riding on his goat

The legend is based on the story of violent criminals that pillaged and plundered the Dutch province of Limburg (and Noord-Brabant and a part of Flanders according to some) in the late 17th and early 18th centuries.

Recent historical research seems to discard the truthfulness of that story entirely. The gang of the Goat Riders would appear to be a myth, deliberately made up by the law enforcers, as a pretext for torturing suspects while investigating thefts. Suspects would be tortured to the extent that they would release new names of the 'members' of the gang. This would lead to hundreds of people receiving the death penalty for only a few thefts in total. The reason of the law enforcers and judges to take these extreme measures in fighting these petty crimes is unknown.

There are two periods in which the Goat Riders were said to be active, around the 1740s and the 1780s. Between 1773 and 1774, 37 Goat Riders were held captured in the Schelmentoren (the local prison next the Pancratiuskerk (the church)) in Heerlen and executed on the Heesberg (a hill now part of the city).

Part of this article consists of modified text from Wikipedia, and the article is therefore licensed under GFDL.
Retrieved from "https://www.monstropedia.org/index.php?title=Bokkenrijder&oldid=9780"
Categories: