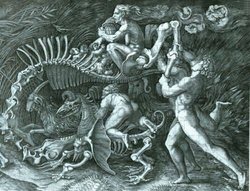 Vision of the Wild Hunt by Agostino Musi (1515)

The Wild Hunt has been adopted several different myths. It is a very fascinating concept, portraying a pack of spectral hounds riding in the air foretelling death or disaster.

The dogs could be on their own or led by a hunter, as well as they could fly with ghosts, witches or fairies, depending on the related folklore, yet hunting for souls.

The wild hunt or chasse sauvage is a pack of spectres and demons, usually as hunters on horses, sometimes accompanied by hounds which used to crawl in the sky at night to gather the departed souls.

The Wild Hunt originates in the old pagan beliefs but has been demonized, associated and confused with the sabbat after the XIIth century.

In some areas the Wild Hunt has been part of a fertility cult with the Huntsman/woman being wild spirits ghosts, which may explain their connection with animals, most notably the stag.

In other places the Hunter was not a God, but the leader of the fairies, such as Gwyn ap Nudd, leader of the Tylwyth Teg fairies, who was said to lead the Hunt in Wales and the West of England.

Toward the end of the Middle Ages, the Wild Hunt became more associated with witchcraft. Instead of saying that the Hunt was led by a spirit of God and featured many other spirits, it began to be said that witches participated in the Hunt and that their leader was either Satan himself or a demonic spirit.

This belief also seems to have become muddled up with the idea that witches rode in procession to Sabbats upon animals, or flew in the sky, and this idea became one of the major charges used in European witch hunts.

As the old name was corrupted and its meaning lost, leadership of the Hunt was transferred to real or imaginary leaders of the past.

Many hunters have been said to lead the Wild Hunt.

In origin the hunter was either a ghost or a God; since the end of the Middle Age it was thought to be of devilish origin.

Harlequin (also known as Herlequin or Erlequin) will become later the driver of the masquerade in the carnival tradition.

King Arthur, Odin, Lady Abonde, Finn and Gwyn ap Nudd are among the long list of other possible candidates.

Belief in the Hell, wain as the wagon in which were borne the souls of the dead survived until recently in Wales and the West Country, and seems to underlie the many reports of phantom coaches with headless horses from East Anglia and elsewhere.

Apart from thus showing why the Hunt is "Wild", and supporting ideas of ecstatic trance and spirit flight, this clue may lead us to a possible origin of the Wild Hunt. By donning animal skins or believing themselves transformed into animals by their rage shapeshifting, Berserkers can easily be seen as the hounds of Odin’s Wild Hunt.