A Green Man is a sculpture, drawing or other representation of a face surrounded by (or made from) leaves. Branches or vines may sprout from the nose, mouth, nostrils or other parts of the face, and these shoots may bear flowers or fruit. Commonly used as a decorative architectural ornament, Green Men are frequently found on carvings in churches and other buildings (both secular and ecclesiastical). "The Green Man" is also a popular name for British public houses and various interpretations of the name appear on inn signs, which sometimes show a full figure rather than just the head.

The Green Man motif has many different faces and variations. Found in many cultures around the world, the Green Man is often related to natural vegetative deities springing up in different cultures throughout the ages. Primarily it is interpreted as a symbol of rebirth, or "renaissance", representing the cycle of growth being reborn anew each spring. Speculatively, the mythology of the Green Man developed independently in the traditions of separate ancient cultures and evolved into the wide variety of examples found throughout history. 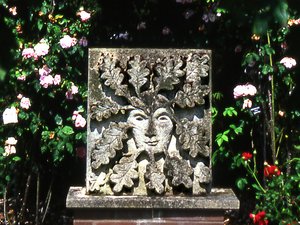 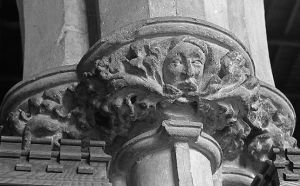 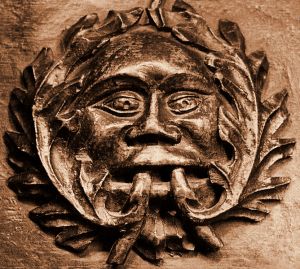 Usually referred to in works on architecture as foliate heads or foliate masks, carvings of the Green Man may take many forms, naturalistic or decorative. The simplest depict a man's face peering out of dense foliage. Some may have leaves for hair, perhaps with a leafy beard. Often leaves or leafy shoots are shown sprouting from his open mouth and sometimes even from the nose and eyes as well. In the most abstract examples, the carving at first glance appears to be merely stylised foliage, with the facial element only becoming apparent on closer examination. The face is almost always male: green women are rare; green cats, lions and demons are also found. On gravestones and other memorials, human skulls are sometimes shown sprouting grape vines or other vegetation, presumably as a symbol of resurrection.

Although the Green Man appears in many forms, the three most common types have been categorised as follows:

The term "Green Man" was coined by Lady Raglan in 1939. It appeared in her article The Green Man in Church Architecture, published in The Folklore Journal. The figure is also often referred to (perhaps erroneously) as "Jack-in-the-Green" or "Jack o' the Green". 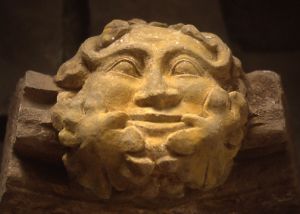 This stone carving of a Green Man ("disgorging" type) from Dore Abbey, Herefordshire, England, retains some of its original colouring

Superficially the Green Man would appear to be pagan, perhaps a fertility figure or a nature spirit, similar to the woodwose (the wild man of the woods), and yet he frequently appears, carved in wood or stone, in churches, chapels, abbeys and cathedrals, where examples can be found dating from the 11th century through to the 20th century.

To the modern observer the earlier (Romanesque and medieval) carvings often have an unnervingly eerie or numinous quality. This is sometimes said to indicate the vitality of the Green Man, who was able to survive as a symbol of pre-Christian traditions despite, and at the same time complementary to, the influence of Christianity. (Rather than alienate their new converts, early Christian missionaries would often adopt and adapt local gods, sometimes turning them into obscure saints.)

Whatever his original significance may have been, many modern churchgoers characterise the Green Man as "the archetype of our oneness with the earth". The symbol is also popular with modern Wiccans and other Neopagans because it depicts an earth-centered concept of male divinity. 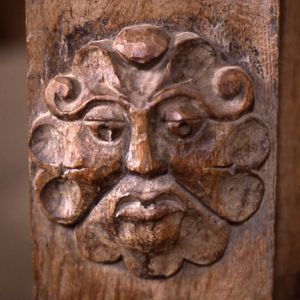 This wood carving of a Green Man ("foliate head" type) is on the 17th century Renaissance rood screen at Dore Abbey, Herefordshire, England 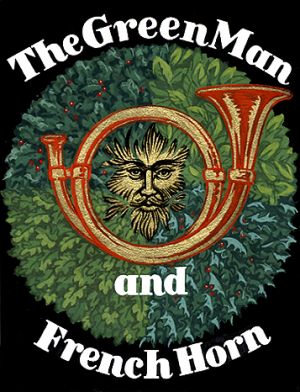 Illustration of the sign which used to hang outside a public house in Covent Garden, London, in the 1970s

From the Renaissance onwards, elaborate variations on the Green Man theme, often with animal heads rather than human faces, appear in many media other than carvings (including manuscripts, metalwork, bookplates, and stained glass), but by that time they seem to have been used for purely decorative effect rather than reflecting any deeply-held belief.

In Britain, the image of the Green Man enjoyed a revival in the 19th century, becoming popular with architects during the Gothic Revival and the "Arts and Crafts" era, when it appeared as a decorative motif in and on many buildings, both religious and secular. American architects took up the motif around the same time.

Parallels have been drawn between the Green Man and various deities and mythical figures such as Cernunnos, Sylvanus, Derg Corra, Green George, Jack in the green, John Barleycorn, Robin Goodfellow, Puck and the Green Knight: it has also been suggested that the story of Robin Hood was at least partly born of the Green Man mythology. (A more modern embodiment might be found in Peter Pan, who enters the civilized world from a nether land, not only clothed in green but wearing leaves as well.) Even Father Christmas (who was often shown wreathed in ivy in early depictions) has been suggested as a similar woodland spirit.

The Green Knight of Sir Gawain and the Green Knight serves as both monster and mentor to Gawain, belonging to a pre-Christian world which seems antagonistic but is in the end harmonious with the Christian one. Sir Gawain himself is also a reference to the Green Man, as he is related to an older, traditional Gawain who is very much a pagan figure, a bringer of spring and rebirth, and also the healer of the king.

Etymological research by the University of Wales into the meaning of the names of Celtic gods and goddesses shows that one Celtic deity, Viridios, has a name meaning "Green Man" in both Celtic and Latin.

"...There are legends of him (Khidr) in which, like Osiris, he is dismembered and reborn; and prophecies connecting him, like the Green Man, with the end of time. His name means the Green One or Verdant One, he is the voice of inspiration to the aspirant and committed artist. He can come as a white light or the gleam on a blade of grass, but more often as an inner mood. The sign of his presence is the ability to work or experience with tireless enthusiasm beyond one's normal capacities. In this there may be a link across cultures, ... one reason for the enthusiasm of the medieval sculptors for the Green Man may be that he was the source of inspiration." — William Anderson, "Green Man: The Archetype of our Oneness with the Earth"

In A Little Book of The Green Man (and on his website [1]) Mike Harding gives some examples of similar figures in Borneo, Nepal and India: the earliest is a foliate head from an 8th century Jain temple in Rajasthan. He also notes that heads from Lebanon and Iraq can be dated to the 2nd century and that there are early Romanesque foliate heads in 11th century Knights Templar churches in Jerusalem. He tentatively suggests that the symbol may have originated in Asia Minor and been brought to Europe by travelling stonecarvers.

The 1969 novel, The Green Man (ISBN 0897332202), is a ghost story by the British author Kingsley Amis, referring to not only the name of the inn owned by the philandering, alcoholic protagonist, but also his haunting by this spirit, among others. The Green Man was filmed as a BBC TV movie in 1990, starring Albert Finney. Amis later wrote a short story, originally published in Playboy magazine, wherein he and his wife may or may not have had their own visitation from the Green Man.

The public house on the fictitious "Summerisle" in the 1973 cult film The Wicker Man is called The Green Man.

In the tv sitcom "According to Jim," Jim has an alter ego known as the "Green Man" who comes out on St. Patrick's Day to cause shenanigans.

Part of this article consists of modified text from Wikipedia, and the article is therefore licensed under GFDL.
Retrieved from "https://www.monstropedia.org/index.php?title=Green_Man&oldid=8155"
Categories: